Visiting a village during colonial times, French officers were puzzled by the local chief’s report that some “big shot” had consumed an entire pig the night before – and apparently even demanded a wife. They later learned the chief was talking about a tiger that had entered the neighborhood. They couldn’t fathom the great respect the locals had for this creature, nor were they aware that it was a long-standing cultural practice. This story has been cited in many research papers on the culture and spiritual beliefs of ancient Vietnamese people. 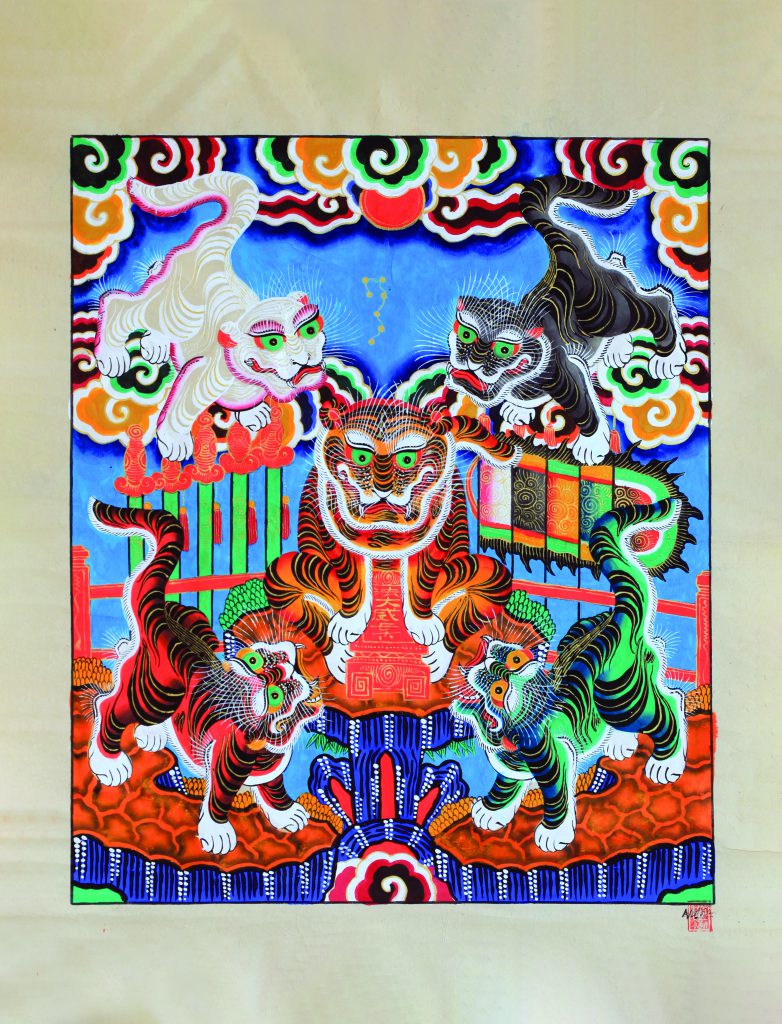 To long-ago Asians, particularly Vietnamese people, the Tiger God was a figure of power in both the physical and spiritual worlds. He was looked up to as a holy guardian that represented all the mighty on Earth, as opposed to the Dragon, which symbolized heavenly forces. Wild tigers are found across India and East Asia, from Siberia to the islands of Indonesia. Back when forests and swamps were abundant, the tiger was the king of the jungle, much like the lion in Middle Asia and Africa.

As a cat species, this solitary predator is an excellent swimmer and climber that preys on most animals, from frogs to cows, buffaloes, and deer, or even other predators like bears. Long ago, these large felines also attacked villages and killed livestock, including buffaloes, cows, goats, pigs, sheep, and dogs. Attacks were so common that domestic animals developed an instinctive fear when they sensed a tiger’s approach. 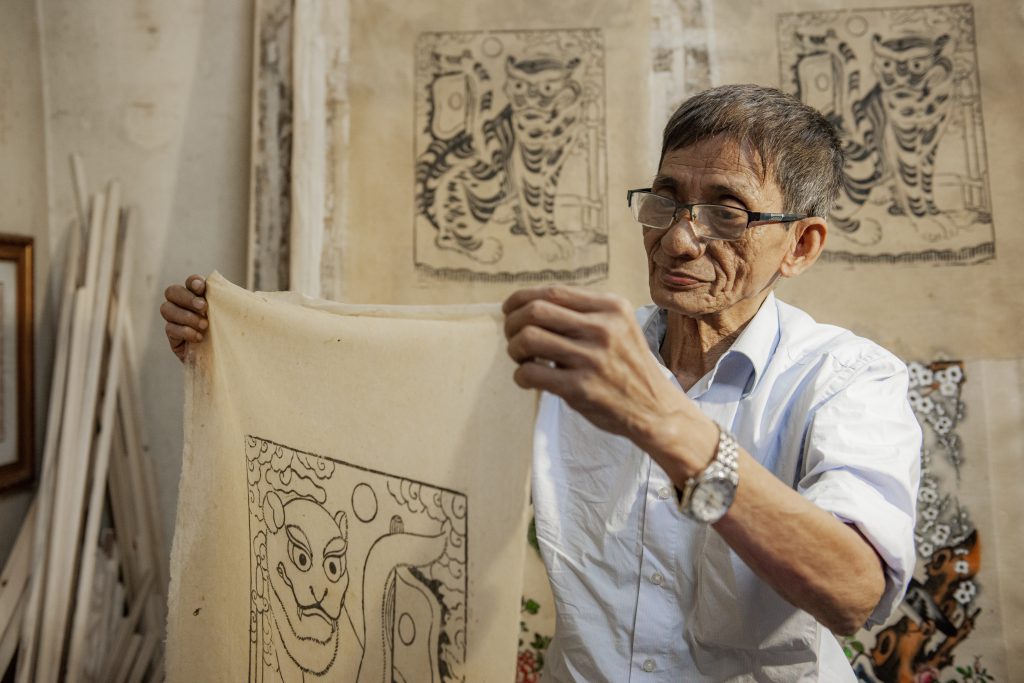 It was said that a dog could sense a tiger from “thirty miles” away and would react by running and barking alarmingly, or hiding under a bed.

A “mile” in the ancient measurement system was equivalent to the distance from which a cow would look the size of a calf. Depending on the era, a “mile” could be approximately 400 to 446 meters, or sometimes 500 meters. This means a dog could sense an approaching tiger from 13 kilometers away. Pigs also felt the presence of this predator from 5 to 7 kilometers away, causing them to squeal in panic. Meanwhile, horses hid in bushes and kicked their hind legs when they sensed a tiger from 3 kilometers away. 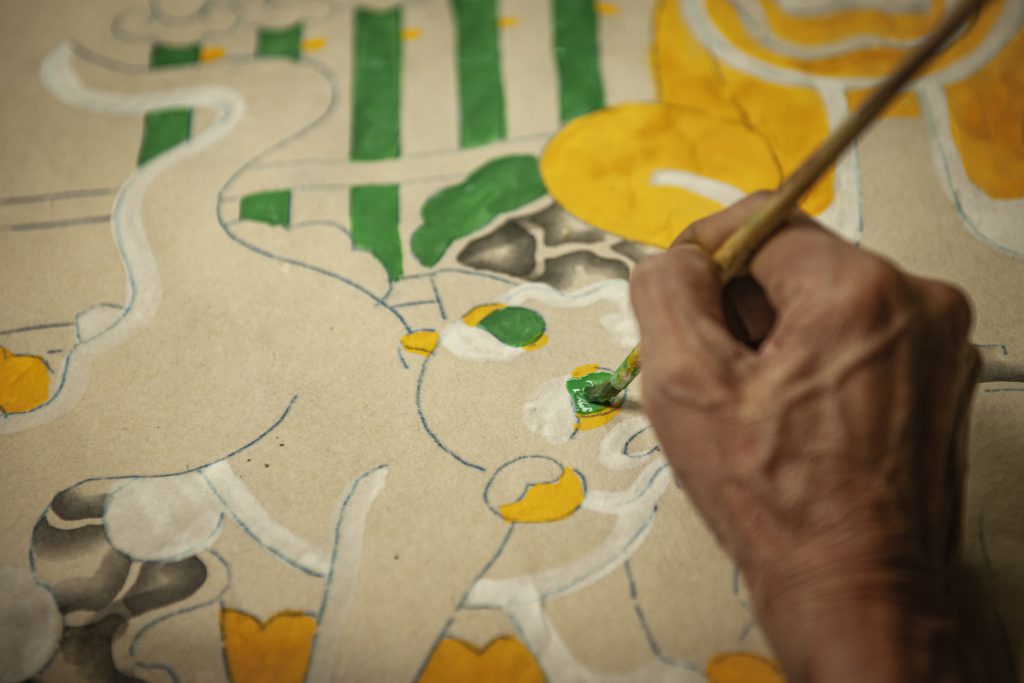 As the king of the jungle entered the village, the other animals fell silent. Thanks to the sudden reactions and silence of their livestock – not to mention the calls of wild animals like deer and birds – people knew of a tiger’s approach. Dogs would even freeze with terror upon smelling the feces of a tiger. Meanwhile, a tiger’s sense of smell was even better than a dog’s. And these powerful mammals feared humans too: they only attacked when left with no choice.

Perhaps it was on account of stories about tigers being sensed from “thirty miles” away that tigers earned the popular nickname of “Sir Thirty”. This nickname can also be traced back to the fact that they often entered villages on the 30th night of the lunar month – when the moon was yet to rise and the sky was at its darkest. This was also the day when people would visit pagodas and avoid killing. 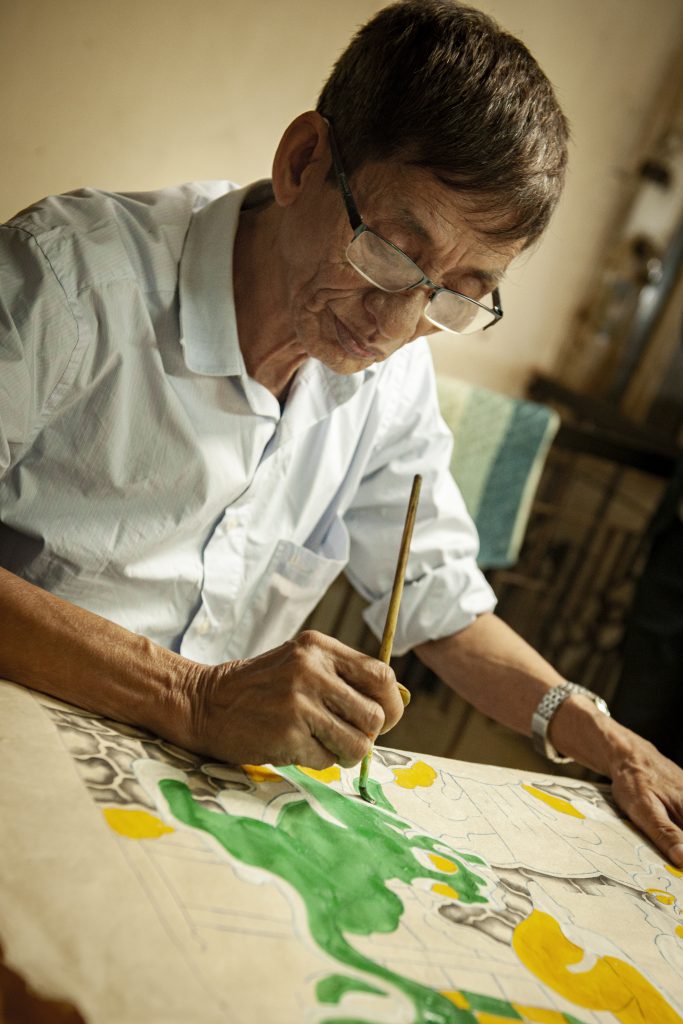 Another possible explanation is that “Thirty” was a number representing great size. Why? Ancient people cooked in different kinds of bronze pots. They were respectively called “pots of three”, “pots of five”, “pots of seven”, and “pots of ten”, from smallest to largest. Preparing feasts and meals for hired laborers would require a “pot of ten”, whereas celebrations or big weddings took something three times bigger. A “pot of three” was supposed to handle “three pecks of rice”, sufficient for a family of five to seven.

Thirty also represented life: the word “thế” (life) could be interpreted as 30 years – the average life expectancy of people long ago, back in the days of the Chinese Tang Dynasty (around the 7th century BC). Later, the number 30 appeared in the quote by Confucius: “At 30, I firmly took my stand,” which means a person becomes truly him- or herself at the age of 30. 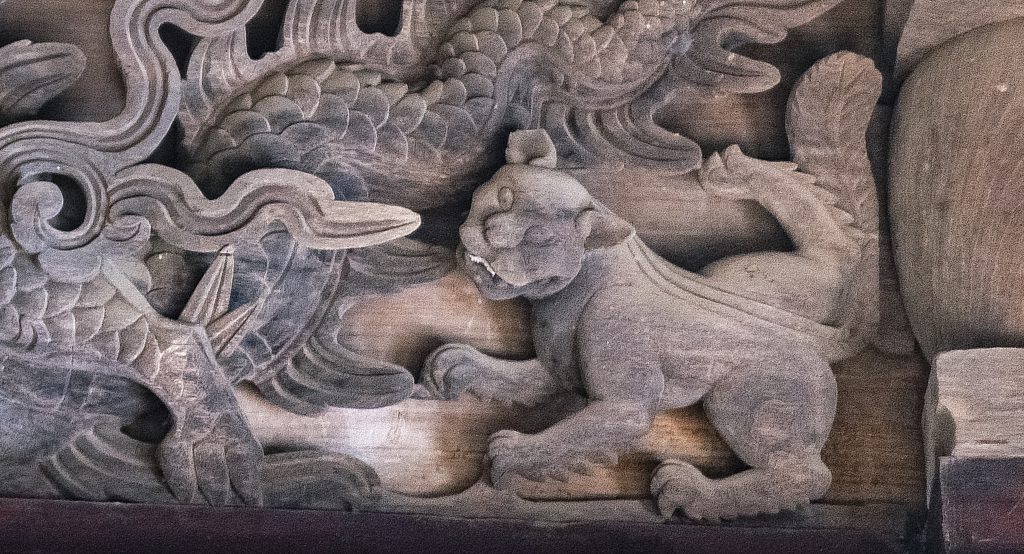 Ultimately, “Sir Thirty” meant perfection. During Vietnam’s Nguyen Dynasty, whoever captured a tiger would be rewarded with 30 Quan (ancient currency). At the same time, they would also be sentenced to 30 lashes (as a formality) for having insulted the Tiger God. The 30th night of the lunar month was also when people made offerings to the Tiger God.

Other folk names for tigers include Sir Dần, Sir Hùm, Sir Cọp, Sir Kễnh, and Sir Ngái in Vietnamese, Tài ngào in minority languages of Northern Vietnam, and Hổ in Sino-Vietnamese. All of these are variants of the word “tiger”. The idiom “stroke a tiger’s beard” refers to trifling with a figure of authority, while “ride on a tiger’s back” means to have no choice but to follow through with some dangerous action.

According to folklore and mythology, worship of the Tiger God started in the Văn Lang period. Back then, the tiger was the embodiment of Phạm Nhĩ, a god from heaven who possessed the power of a thunder god. The tiger was also admired as the god of chiên đàn – an ancient tree of magic, also called Xương Cuồng (meaning “dictatorial”). Images of tigers were carved onto Đông Sơn bronze drums and depicted as figurines and relief sculptures, often seen in temples, shrines, and on public altars. 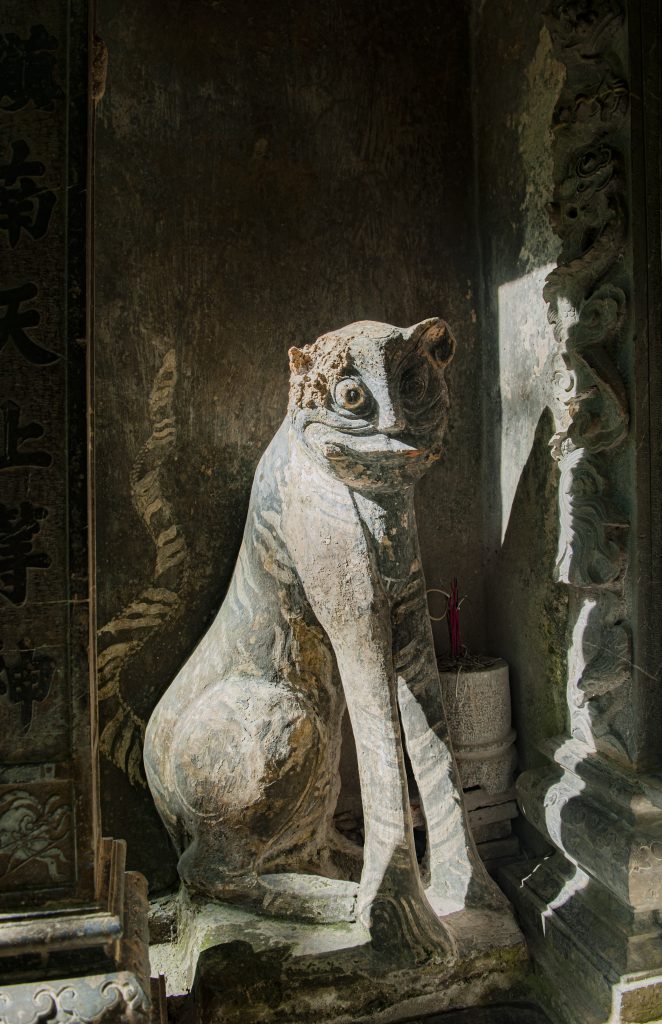 Tigers have also inspired various traditional paintings, including The Tiger God and The Five Tigers. The latter features a golden tiger at the center, a red one in the southern corner, a black one in the northern corner, a green one in the eastern corner, and a white one in the western corner. Some other paintings depict the Five Tigers individually, symbolizing the center and four directions of the Earth according to the theory of Five Elements. In these artworks, tigers are portrayed as the guardians of the center and four directions of the Earth, with the constellations of Ursa Major and Ursa Minor on the sides, decorated with banners and swords representing martial arts.

Holding firm beliefs in the power of this mighty creature, Vietnamese people often buy these paintings to place underneath their family altars and at shrines devoted to the Tiger God or the Land Genie.

Music from the heart

Go your own way 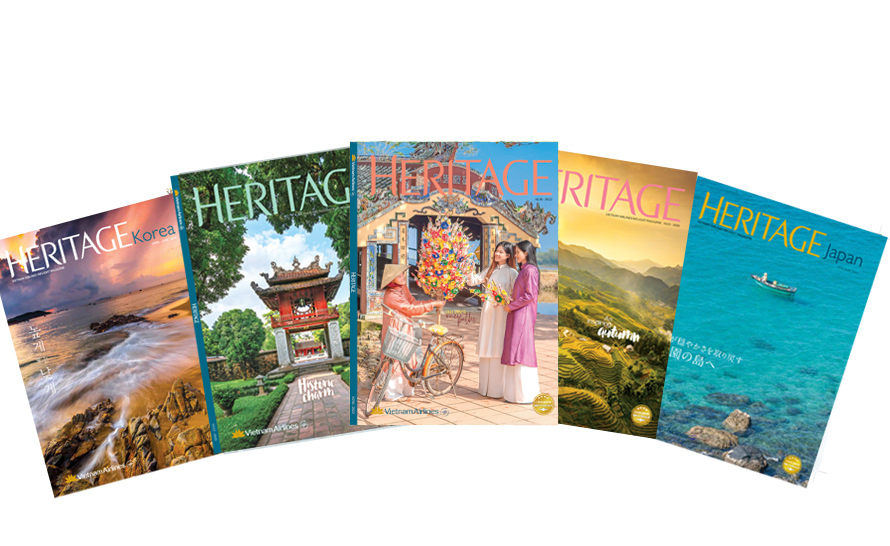 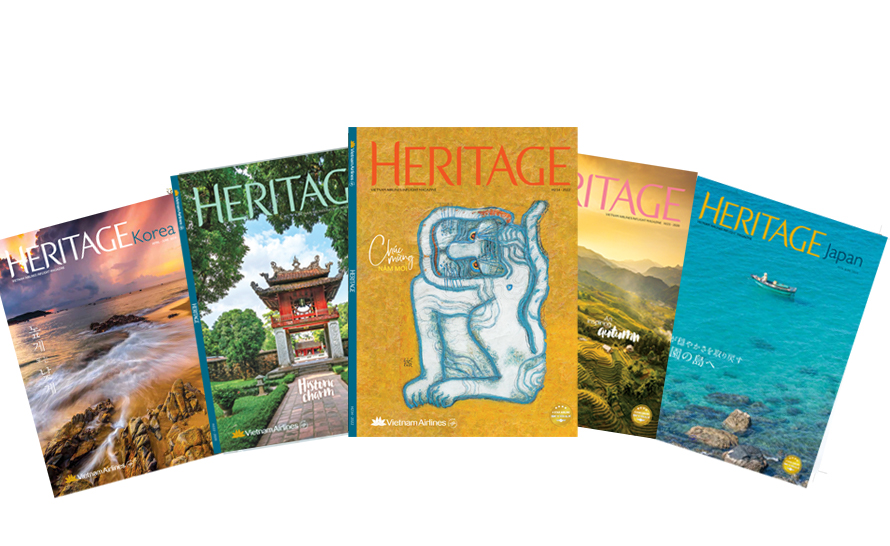