This story was adapted from the “Treasury of Vietnamese Folk Tales”
Illustrator: Vu Xuan Hoan

There was once a foreign king who possessed an extremely rare jewel that had two bizarre qualities: it was light as a feather in your hands, but weighed a ton once set on the ground or any object. And it emitted a light so dazzling that it shone brightly no matter where it was hidden. The king was obsessed with this jewel and admired it constantly.

One day, the jewel vanished. The king and his men searched everywhere. Looking through his magical Thousand-Mile Scope, the king saw the jewel flying southward. He immediately dispatched one of his mandarins and a troop of 500 soldiers to follow. After days at sea, the king’s men reached land.

One night as he was sitting in his courtyard, a man named Dien Chi saw a strange gleam flashing through his garden. He rushed to catch the shining object and was stunned to discover a glowing jewel. Knowing it was rare and valuable, he rushed to hide it in a wooden chest. However, the jewel’s light shone through the chest and illuminated the whole house. He put it in an iron chest, but the light still shone through. Even when he buried the jewel, its light was visible. After many days of experimenting, Dien Chi realised that only flesh could hide the jewel’s light. So he cut a hole in his thigh, inserted the jewel and sewed his leg back up. While the pain was terrible, Dien Chi was relieved to have hidden his treasure. 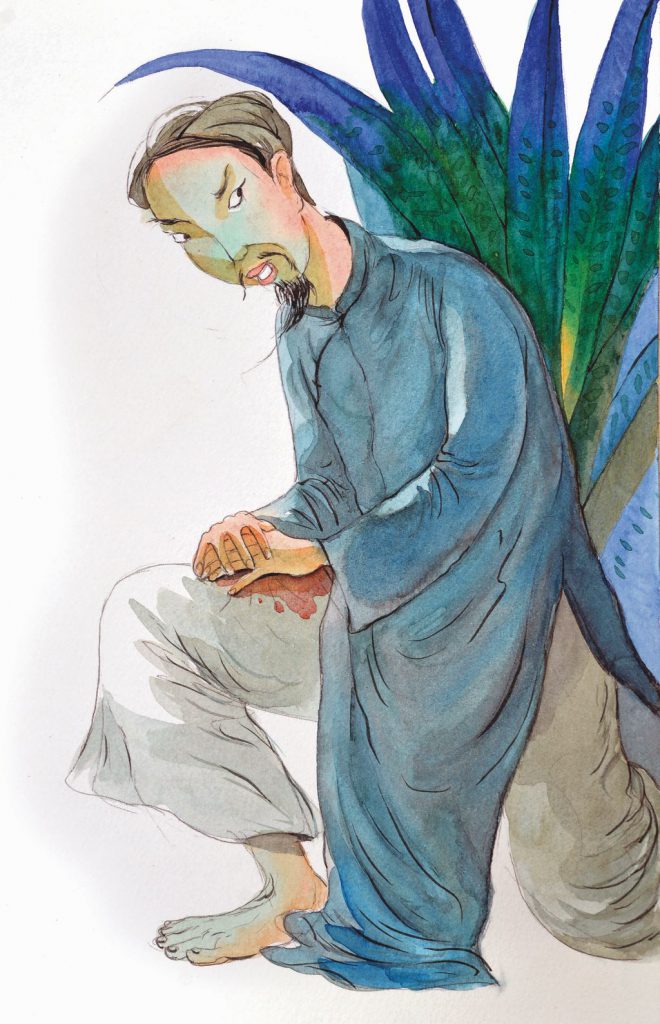 The king’s troops continued to search. When the Thousand-Mile Scope failed to spot the jewel’s glow, the king’s mandarin declared: “We know it was nearby. Perhaps a local person has hidden the jewel under his skin.”

He ordered his men to make camp on an island in the river and kill some cattle for a feast, then invited the locals to attend. To reach the island, everyone had to walk across a floating plank. “Watch to see if the floating plank sinks when anyone crosses,” ordered the mandarin. People came from far and wide to attend the feast. Finally, the mandarin learned that only one man – Dien Chi – was not there because he had a sore leg and was in bed.

Upon hearing this news, the mandarin sent a palanquin to fetch Dien Chi. Dien Chi was happy to climb in. But when it came time for him to cross the floating plank, it sank into the river. “That’s him!” cried the mandarin. “I found the jewel!”

Dien Chi had no choice but to confess. Hearing his tale, the mandarin said: “Our king lost his magical jewel, which flew to your land. We do not mean to snatch it from you but will reward you with gold and silver. How much do you want in exchange?”

“Pile stacks of money as thick as a man’s head from where I stand to where I can throw this piece of lead,” replied Dien Chi.

The mandarin paid Dien Chi as requested and led his troops away.

After that, Dien Chi was the wealthiest man in the land. Hearing of his wealth, the local king summoned Dien Chi to court and offered him the hand of one of his daughters in marriage. The couple lived happily.

But one day, an old friend of Dien Chi’s came to visit. Dien Chi took him all around his huge house and boasted: “I’m the richest man in this kingdom.” When the princess heard Dien Chi speaking so arrogantly, she was outraged and told her father. The enraged king summoned Dien Chi to court.

The competition began. It took some time for news of the king’s generosity to filter out, so not many poor people came to collect alms during the first few days. But by the time of Dien Chi’s turn, huge crowds had gathered. He gave away all his gold and money, then started handing out rice. But his rice larders grew emptier and the crowds bigger, until finally, Dien Chi lost.

After her father executed her husband, the princess felt great regret. She handed her remaining estates over to local villagers and became a nun.