The Tale of the Nha Be River

This story was adapted from “The Treasury of Vietnamese Folk Tales”
Illustrator: Vu Xuan Hoan

Once upon a time, there was a man named Thu Huon who lived in Gia Dinh Province. He was originally an assistant for government officers. Over more than 20 years of insinuating himself into different ancient courts, he tore many families apart, caused many people to suffer injustices, and amassed a huge amount of money and goods. Since his wife had died young and he didn’t have any children, it was nearly impossible for him to spend all his money.

One day, someone told Thu Huon that the living and dead could meet at Mach Ma Market in Quang Yen Province. Being a husband who had dearly loved his wife, Thu Huon went to the North to be reunited with the wife he missed. When they met, Thu Huon told his wife how his life had gone since the day they parted. Knowing that she now worked as a nanny in the King of Hell’s palace, Thu Huon asked to visit the spirit world. 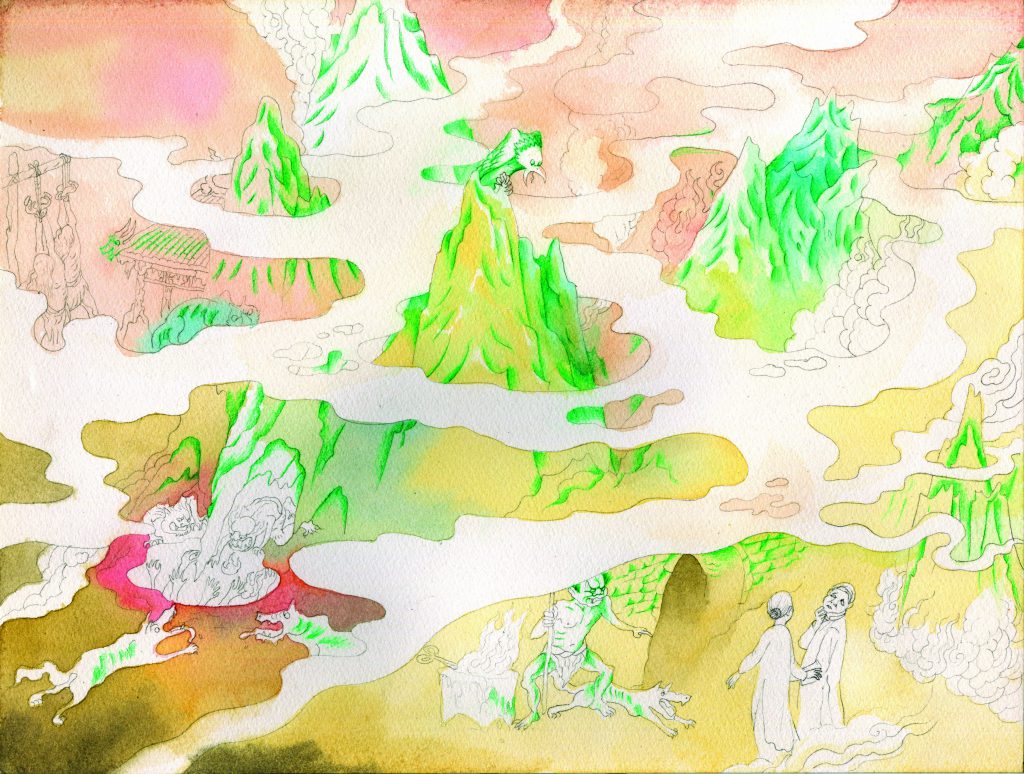 After traversing many miles of pitch-black paths, they reached the spirit world in no time. Thanks to his wife, Thu Huon could easily enter every place. His wife gave him a permit and said: “You can go anywhere you please, except for the palace of the king and queen.”

After hanging around for some time, Thu Huon came to a prison. Even standing at the gate, the cries and screams coming from inside gave him a real fright. Looking at the execution chambers he realized that this was indeed a place of horrendous tortures, just like humans said. He saw many cangues, a type of heavy board secured around a prisoner’s neck as a form of punishment. One was big and long and made of wooden sticks as heavy as iron. Curious, Thu Huon asked the warden: “What is that for?”

“It’s waiting for a vicious sinner from earth. These cangues have all been taken. You can see the person’s sins just by looking at the size of the cangues.”

“Who will carry this cangue?”

The warden leisurely opened a big, thick book, pointed at a line and read out loud: “His name is Thu Huon, a scoundrel who lives in Gia Dinh Province, Phuc Chinh District…”

Thu Huon was so startled that his face turned blue. He asked: “Why? What are his sins?” 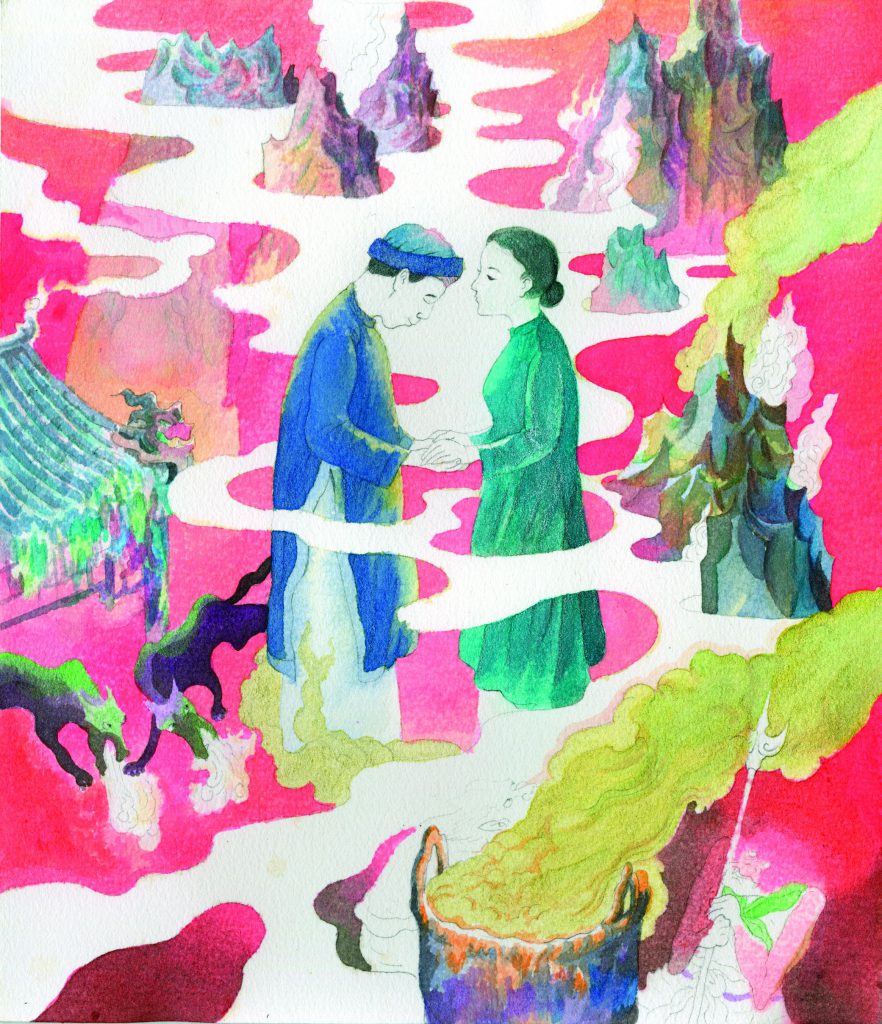 The warden’s eyes were still glued to the book.

“Being an assistant to government officers, he lied and made innocent people suffer. His sins are written all over these pages. Here, listen: In the year of the buffalo, he changed the words “unintentionally killed” to “intentionally killed” which caused the death of Thi Nhan and her child. Thi Nhan’s cousin then used this opportunity to seize all her property, while Thu Huon got 10 gold bars and 10 silver bars. In the same year, he put Mr. Ngo Lai in prison so that he could steal Mr. Ngo Lai’s 12 acres of land. In … “ 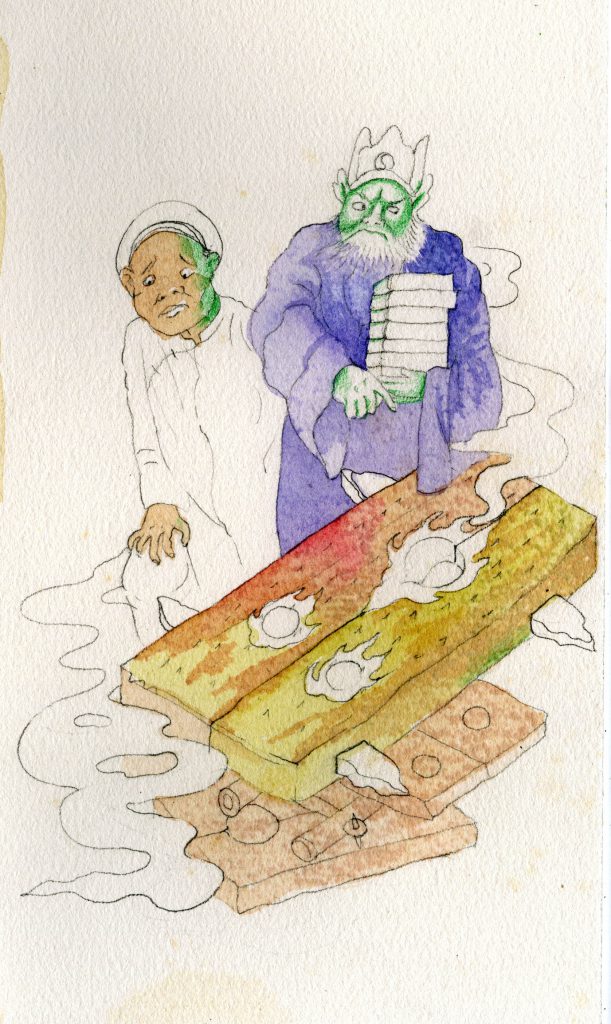 Thu Huon turned pale. Little did he know that they had seen his every move on Earth. He interrupted and played dumb:

“What about his wife? Must she carry a cangue?”

“No! The culprit must pay the damage! I heard she passed away and was a nice woman.”

“What if he wants to repent?”

The warden put down the book and replied:

“Take an eye for an eye! If he wants to, he must perform charitable works and give offerings for the things he stole.”

After saying farewell to the warden and his gruesome torture instruments, Thu Huon wasn’t in the mood to see other places. When her husband insisted on returning to Earth, Thu Huan’s wife led him out of the King of Hell’s Palace. Before parting, he told her: “I must go back to pay my debts. In three years’ time I will try to return. If so, please come to the market to fetch me!”

Arriving back in Gia Dinh Province, Thu Huon gave generously to charity. He gathered impoverished people in the region and gave them money and rice. He donated his land to the village, the temple, and his neighbors. Everyone found it strange that a man infamous for his greed was now unusually generous. They said: “Such ill-gotten gains will never yield good.”

After three years of doing good deeds, Thu Huon had given away three-quarters of his wealth. Remembering the appointment with his wife, he packed up his things and went to the North to find Manh Ma Market. He then persuaded his wife to allow him to visit the underworld once more.

Nothing had changed since the last time Thu Huon had visited the prison, including the warden. The setting was the same, with areas for disembowelment, eye-gouging and arm-cutting… However, there were some changes where the cangues were stored. Some cangues remained unchanged, but some were bigger or smaller than they had been. In particular, Thu Huon’s cangue was shorter, although it was still bigger and longer than the other normal cangues. He asked the warden:

“This cangue used to be bigger, right?”

“Yes. Maybe that villain has recently repented and that’s why it has shrunk.”

Thu Huon went back to Earth and continued to do charitable deeds and give offerings. This time, he even sold his house, traveled to Bien Hoa Province and built a big temple to worship Buddha. He followed the Dong Nai River to do one last meaningful good deed. At that time, it was inconvenient to move around the fork of the Dong Nai and Gia Dinh Rivers. Thu Huon decided to reside here. He built a big raft that had some rooms in which to stay and rest, along with utensils, household supplies, money, and rice. He welcomed all passers-by, especially those who lived under the poverty line. He used his raft as a shelter and let them stay for days or even months without charging them a penny. He kept on doing this until the day he died.

Today in Bien Hoa, there’s a pagoda called Thu Huon Pagoda located at the fork of the Dong Nai River and the Gia Dinh River, which forms the Nha Be (Raft house) River. Pilgrims visit here to recall the good deeds Thu Huon performed for people crossing this river.

The origin of white Ban flowers