This tale was adapted from a story in The Treasury of Vietnamese Folk Tales
Illustrator: Nguyen Van Duc

Once upon a time there lived a childless couple who collected firewood to survive. Despite their poverty, they always helped others.

Seeing their kindness, the Jade Emperor had his Crown Prince reincarnated as their son. The boy, Thach Sanh, was still young when his parents died, so he lived alone in an old hut beneath a banyan tree. His sole possession was an axe left by his father to chop wood. When Thach Sanh was old enough, the Jade Emperor sent an angel to teach him martial arts and magic.

One day a liquor-maker named Ly Thong spied the boy. Seeing his strength, he approached Thach Sanh in a friendly way and invited him to live with him and his mother. The lonely young man agreed. 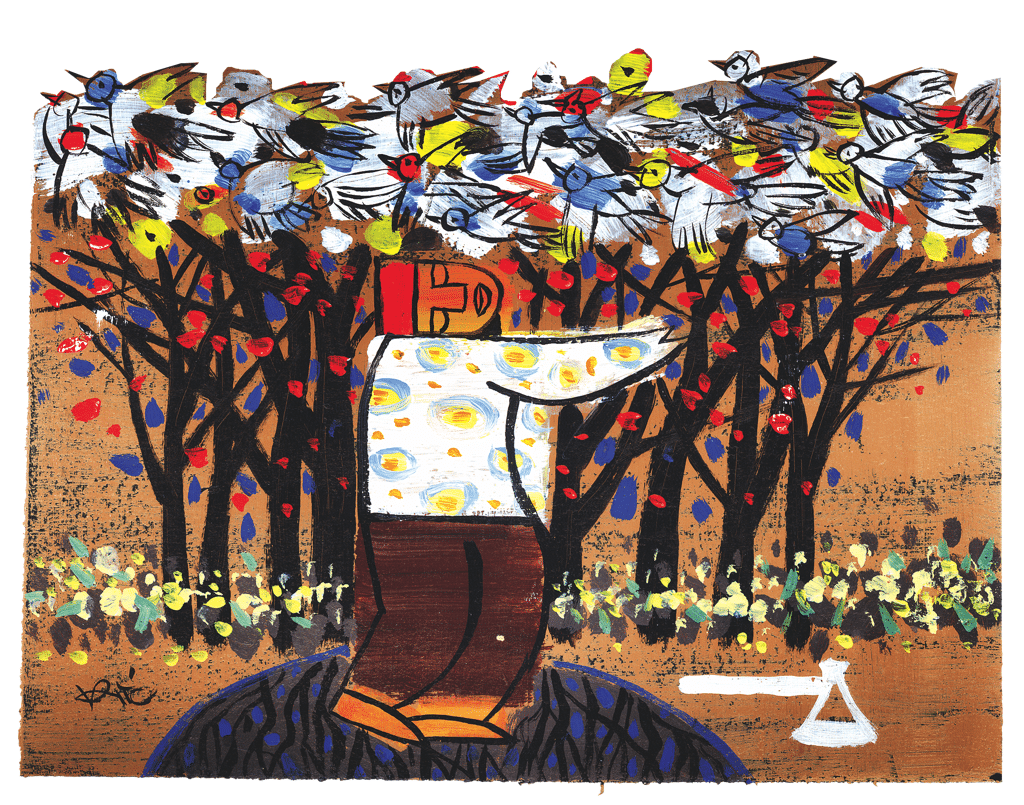 At that time there lived a terrible python monster that used magic to catch and eat people. The king’s soldiers could not capture it. In desperation, the locals built a shrine to this monster and agreed to sacrifice one person every year to appease it. Unfortunately, Ly Thong was chosen to be sacrificed. Ly Thong and his mother were terrified and conspired to trick Thach Sanh into taking Ly Thong’s place. “He is stranger here and knows nothing. No one will miss him,” reasoned Ly Thong.

“It’s my turn to stand guard at the shrine tonight but I’m busy making wine, so please go in my place and come home tomorrow morning,” said Ly Thong.Thach Sanh went to the shrine. He’d just fallen asleep when the python monster attacked. Thach Sanh fought back with his axe and cut the monster in half, killing it. He cut off the beast’s head and carried it and its magical bow and arrow back to Ly Thong’s house.

Hearing Thach Sanh return, mother and son were petrified. But upon hearing his story, they devised a plan. “The King has been feeding the python god for years,” said Ly Thong. “You shall be sentenced to death for having killed it! Run and hide. I will handle this.”

Horrified, Thach Sanh fled back to his old banyan tree. Meanwhile, Ly Thong carried the monster’s head to the capital and claimed to have slain it. He was congratulated by the king and given the title of Lord Lieutenant. 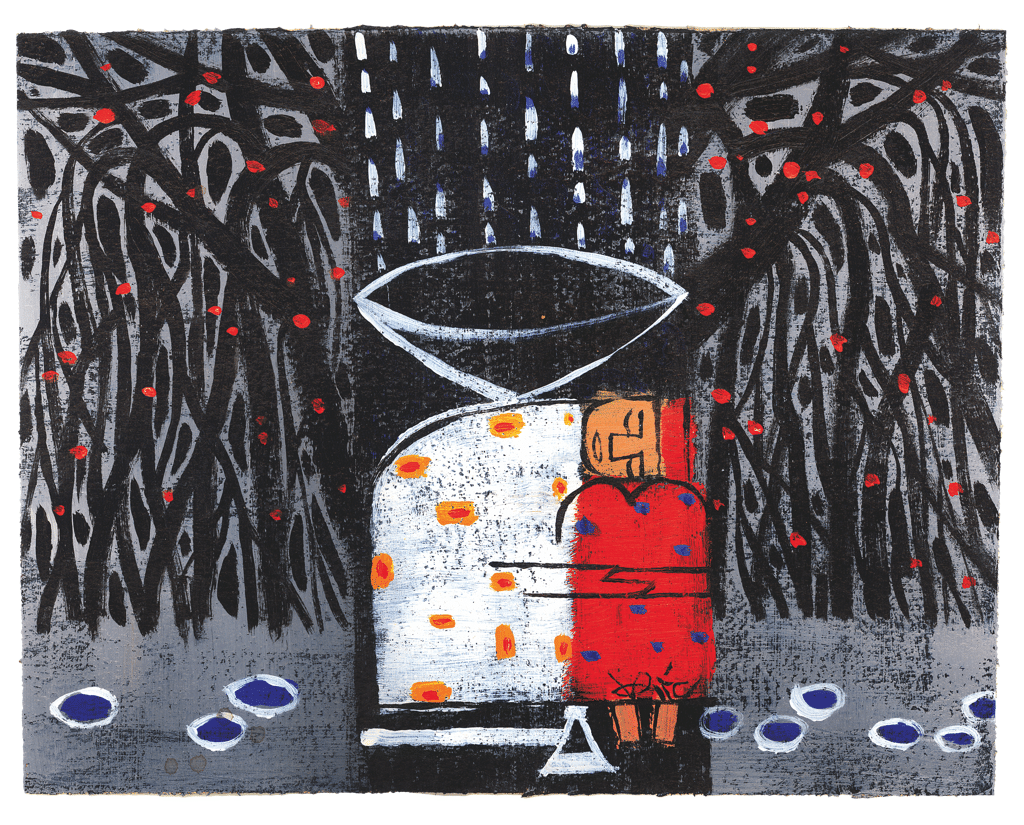 Shortly after, the king’s only daughter was abducted by a mountain goblin that had transformed itself into a monstrous eagle. The king summoned Ly Thong and promised him her hand in marriage, if he could save her.

At that moment, Thach Sanh was sitting under the banyan tree. Glimpsing a woman in the eagle’s grasp, he raised his bow and shot it. The eagle was forced to land to pluck out the arrow, after which it dragged the princess into a cave. Ly Thong realized he wasn’t up to the task of killing the eagle and ordered his men to find Thach Sanh. When Ly Thong found him, Thach Sanh led the king’s troops to the area where he’d shot the eagle and found the cave. When nobody dared venture inside, Thach Sanh tied a rope around his waist and went down.

Far inside the cave, Thach Sanh found the princess and the injured eagle. But after the princess had been pulled up, instead of pulling up Thach Sanh, Ly Thong ordered his men to block up the cave’s entrance. Thach Sanh was trapped in a dark maze with the enraged eagle. Luckily, thanks to his powers, Thach Sanh killed it and escaped. Before exiting the cave he found a boy locked in a cave and freed him too. This boy was the son of the Sea King. When Thach Sanh returned him to his grateful father, the Sea King gave him a magical lute. 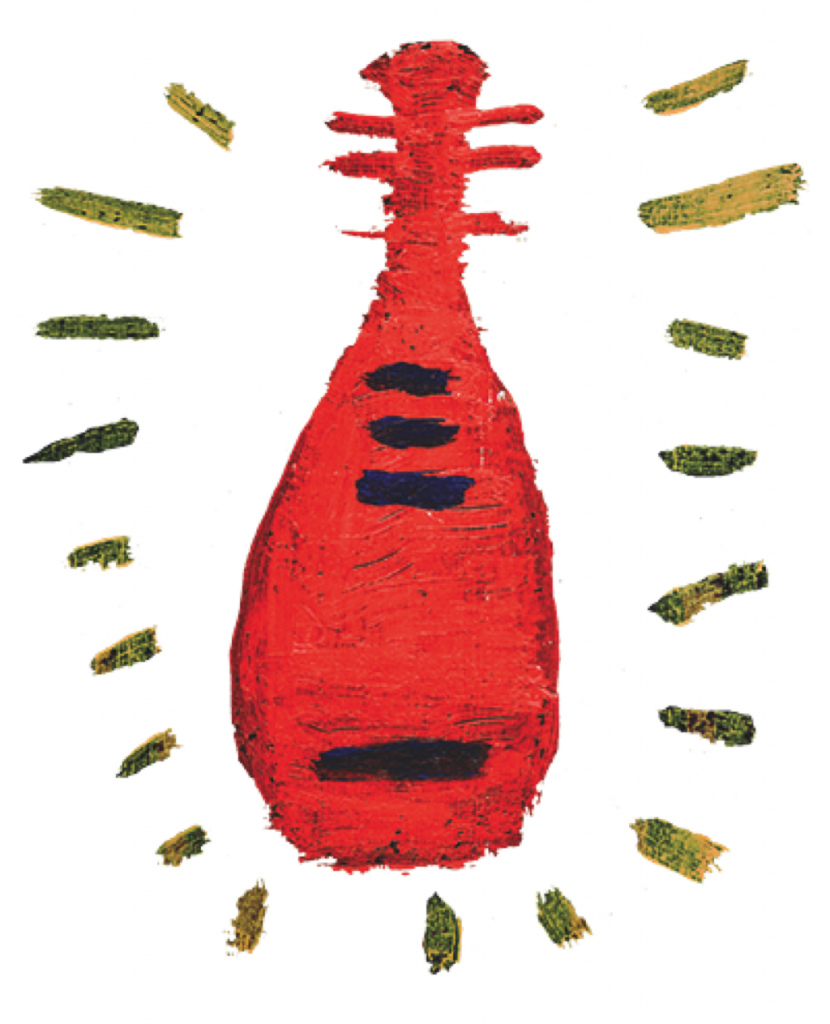 The spirits of the python and eagle monsters were furious and wanted revenge. They snuck into the royal coffers and stole some treasures, then hid them in the banyan tree where Thach Sanh lived. They then led royal guards to the tree. Thach Sanh was accused of theft and thrown into jail.

After being rescued from the cave the princess lost her voice. She was in such poor health that her wedding had to be postponed. Ly Thong hired countless shamans to try to cure her but nothing helped. Upon learning that Thach Sanh was alive, Ly Thong was worried and sentenced him to death. In jail, Thach Sanh whiled away the hours playing the lute he’d received from the Sea King. The music reached the princess’ sickroom. “Father, please bring the lute player to me,” she said – uttering the first words she had not spoken in months. The overjoyed king ordered his men to fetch Thach Sanh. 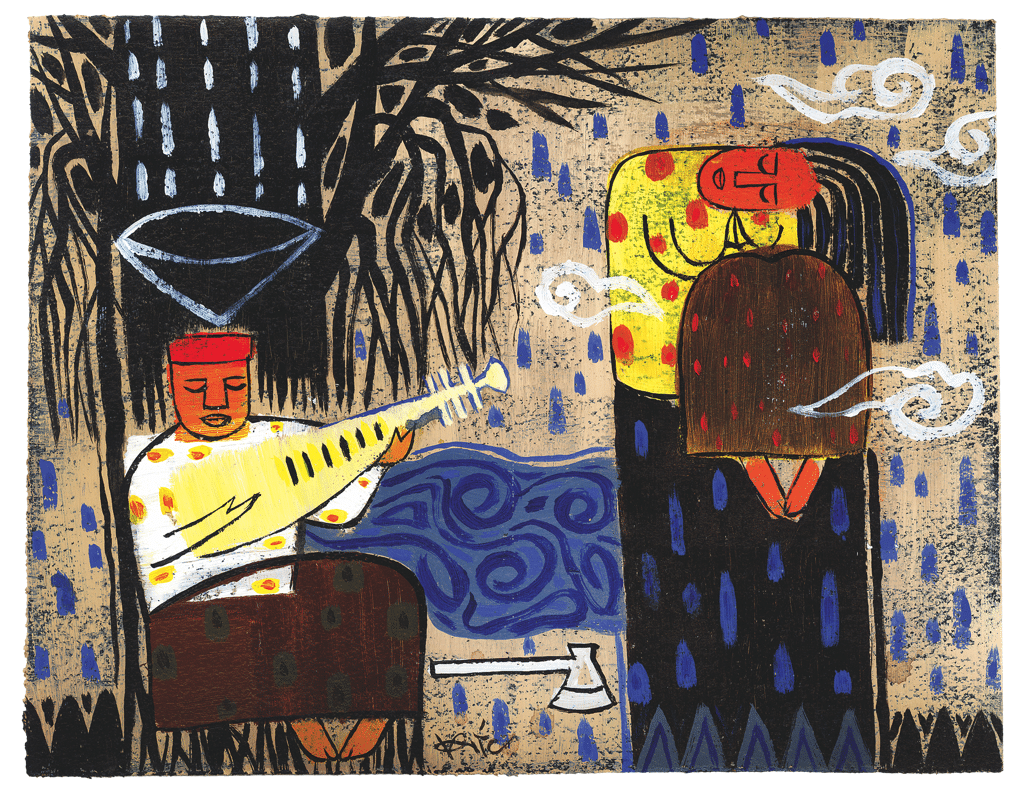 When the princess recognized him as her savior, the truth came out. Ly Thong and his mother were banished. On the way home the pair was struck by lightning. 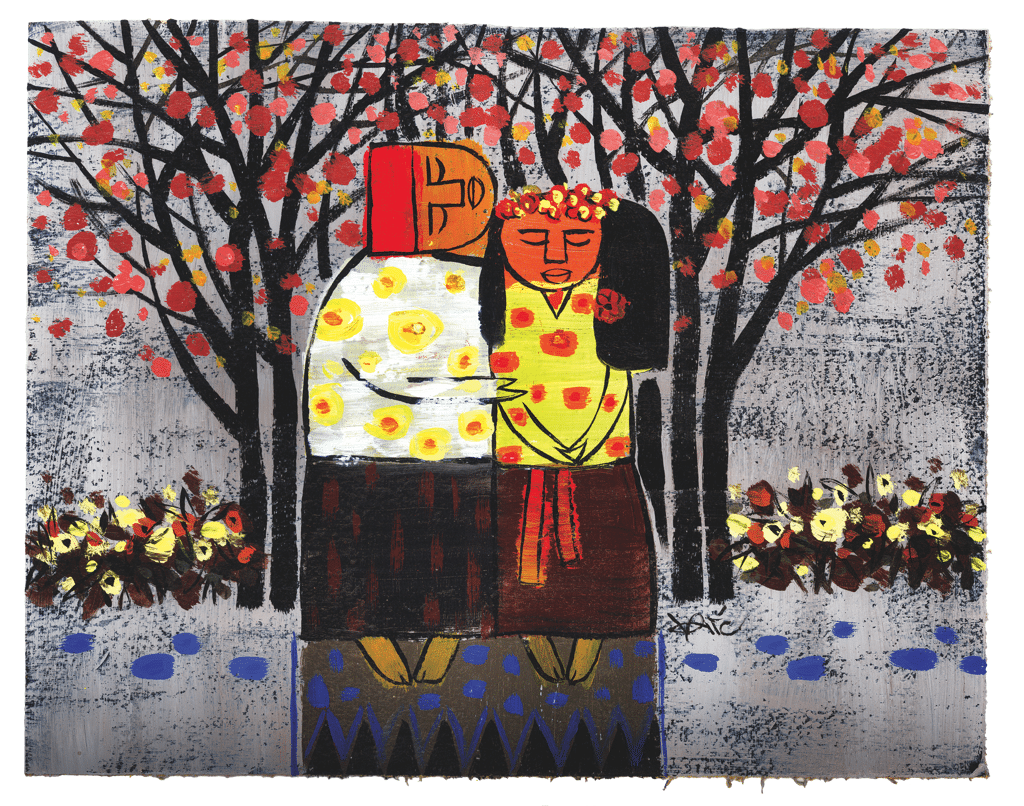 Back in the palace, Thach Sanh and the princess were married. The princely heirs of the eighteen neighboring states were furious about having been overlooked in favor of a commoner and gathered their armies to invade. Thach Sanh then played his magic lute. Upon hearing it, the invaders turned and fled. As a kind gesture, Thach Sanh presented the princes with a bowl of rice that could never be emptied. They bowed to him in amazement, then went home.