Fifteen nautical miles northeast of Binh Son in Quang Ngai province lie a group of islands that include the Re Islands (Ly Son), Bo Bai Islands and Mu Cu Islet. Together they form the Ly Son Island District, which spans an area of 10 square km and has a population of over 20,000 residents.

Over 400 years ago, the Re Islands were claimed, settled and developed by Vietnamese sailors from Sa Ky Estuary. The islands were formed by a volcanic eruption some 25 to 30 million years ago, resulting in five peaks: Gieng Tien, Thoi Loi, Pebble Islet, Vung Islet and the Ear Islet, as well as two giant basins on Thoi Loi and Gieng Tien, from which the groundwater sprung up to sustain the islands’ inhabitants. Volcanoes also gave these islands some mysterious caves; submerged reefs that are home to many endemic aquatic creatures; and fecund basalt soil able to support various flora species. As well as bestowing natural beauty on Ly Son, nature provided the means for generations of Vietnamese people to earn their livelihoods. The islands developed a cultural identity unique to the settlement of Vietnam’s offshore territories.

Long before Vietnamese mainlanders settled on the Re Islands, these islands were home to people of the Sa Huynh and Champa cultures, whom we may call “pre-Vietnamese settlers”. Deep inside the volcano of Gieng Tien (An Vinh) archeologists have found tools and daily items made by Early Iron Age people, dating back some 300,000 years. Researchers have also found jar dolmens, earthen dolmens and items such as bowls, trays and bronze axes from the Sa Huynh Culture, dating back 2,500 to 2,000 years ago, in two sites at Conch Village (An Vinh) and Suoi Chinh (An Hai Commune). The Re Islands were also settled by Champa people, whose relics are still found in the Bull Shrine dedicated to the God Nandin and in the Cave Pagoda where offerings to Hindu deities were placed on sandstone sacrificial pedestals. 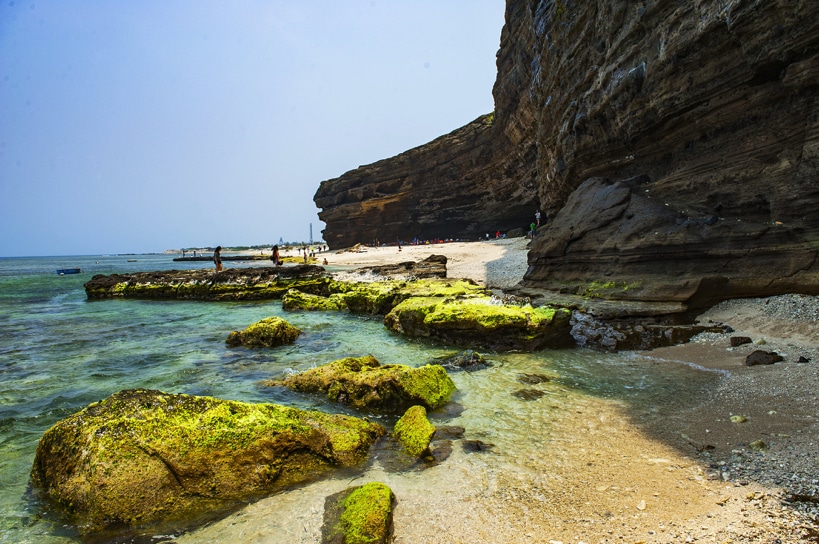 The long-ago Vietnamese sailors who made their homes on the Re Islands brought their Vietnamese cultural traditions with them. Today, the islands are home to 30 historical sites that reflect Vietnam’s maritime culture. An Vinh Titular Temple and An Hai Titular Temple are dedicated to 15 founders remembered for settling Ly Son. Yin Pagoda honors Hoang Sa militants from Ly Son who were lost at sea during 400 years of discovering and resettling the offshore territories of Hoang Sa – Bac Hai – Truong Sa. Whale tombs in Trung Yen Pavilion, Tam Toa Pavilion, Dong Hai Mausoleum, Tan Mausoleum and Tu Dune still preserve the gigantic skeletons of whales, which local fishermen consider sacred. The locals still refer to Xo La Well as the “King’s Well” due to the exile of Nguyen Anh before he became Emperor Gia Long, the father of the Nguyen Dynasty (1802 – 1945) who annexed Hoang Sa islets to our country in 1816, thus officially declaring our sovereignty over these islands.

The Re Islands were recorded as the homeland of Hoang Sa Troops in historical accounts. Under the reign of the Nguyen Lords in Cochinchine (1558 – 1775), the Nguyen Lords ordered soldiers drafted in An Vinh and An Hai in Binh Son to found the Hoang Sa Crew governed by the court. Each March, they sailed to Hoang Sa to exploit salangane nests and other marine treasures, collect cargo and weapons from shipwrecked vessels stranded on the islands and nearby submerged rocks and carry everything back to Phu Xuan to hand over to the lords.

In memory of Ly Son natives lost at sea while pursuing their livelihoods or performing their sacred duties for the nation, inhabitants of Ly Son set up “evocation graves”, where clay “bodies” were buried in mulberry wood coffins decorated with five-colored yarn. Ly Son is also home to the Proxy Feast, a unique ceremony to reenact the farewell rituals of local militants as they set sail to reclaim Hoang Sa. Locals have hosted this festival for centuries. It is now a national event that draws many mainlanders to Ly Son.

The islands’ stunning natural beauty and heroic history are drawing growing numbers of visitors to the Re Islands – Ly Son. Along with pristine beaches and wild nature, visitors can explore Vietnam’s history and the rich maritime culture of the Central region.