An encounter with fairies

This folk tale is adapted from the “Treasury of Vietnamese Folk Tales”
Illustrator: Nguyen Cam Anh

In the Tran Dynasty, a talented young mandarin named Tu Thuc hailed from Ai Province. He was given a post in the Tien Du District, now in Bac Ninh Province. 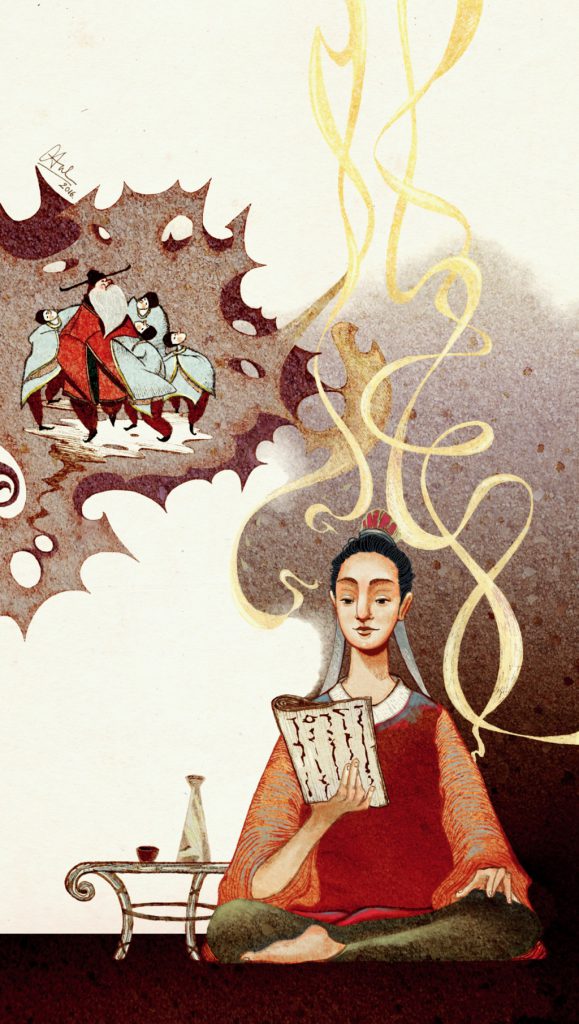 Near the district Tu Thuc governed lay a huge pagoda. Its courtyard was full of peonies. Every January, Buddhists came from far and wide to pay homage to the Buddha and admire the flowers. Tu Thuc joined the pilgrims and sightseers, traveling alone and wearing the simple disguise of a disciple. To protect the flowers, the pagoda set a rule that anyone who broke a flower must pay a fine. If they couldn’t pay, they were forced into slavery to pay off the debt.

That day, a young woman visited the pagoda. Unaware of the rule, she picked a flower. The pagoda’s guards immediately rushed to fine her. The maiden confessed that she had brought no money with her. The guards tied her to a pillar to humiliate her and try to squeeze some money out of her.

Seeing the poor young woman surrounded by thugs, Tu Thuc flew into a rage. He ordered them to untie the girl but the guards refused. Tu Thuc  offered his robe to the thugs in return for her freedom. She thanked him profusely. 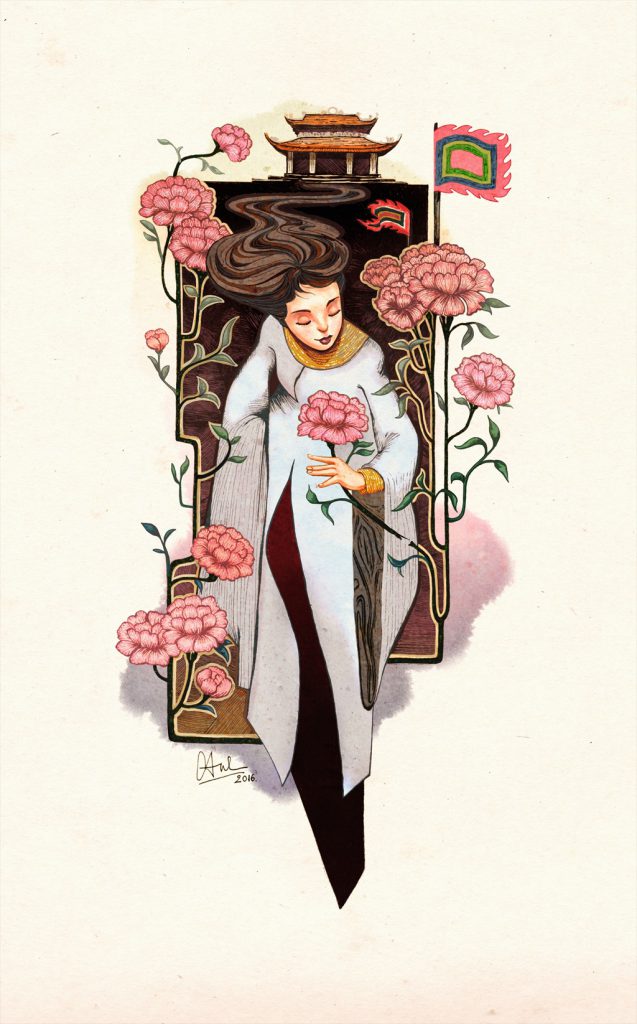 Admiring her beauty, Tu Thuc wished to befriend her. “Where are you from?” he asked. “Your accent does not sound local.”

“My home is in Tong Son District in Ai Province” said the girl, which made Tu Thuc even more excited. They were from the same region! Before parting ways, the young lady invited him to visit her the next time he went home.

Not wishing to be too harsh, Tu Thuc allowed some locals more time to pay their taxes. He was summoned before the senior mandarins and reprimanded. Tu Thuc decided to resign. He traveled home to visit his parents. After spending a few days in his village, he remembered the invitation of the young woman he’d met in the pagoda. He traveled through the wilderness but could not find her village. Tu Thuc kept searching.

One morning at dawn, Tu Thuc climbed the highest mountain to the Holy Patron’s Gate. Suddenly, before his eyes lay an island resembling a lotus on the sea. Amazed, he set sail and reached the island. He found a vast cave and ventured inside, but as soon as he had entered, the cave’s mouth closed behind him. Tu Thuc felt his way onwards in the darkness. Seeing light up ahead, he spied high mountains with steep cliffs. After climbing to the top, he saw a magical palace. 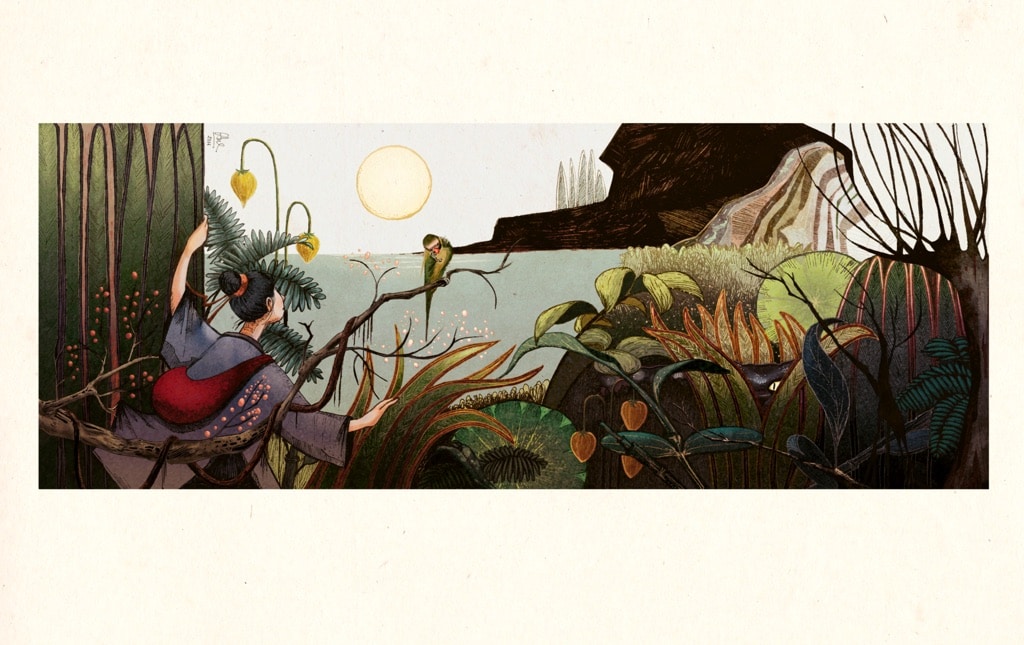 As soon as he reached the palace, he was met by a refined lady who said: “This is the sixth out of 36 caves of the fairy realm. I have long ruled this world. It is a pleasure to meet  a chivalrous and kind man.” The lady then told Tu Thuc to wait. “Your old friend is coming,” she said.

Tu Thuc was overjoyed to see the young woman he’d rescued in the pagoda. “Oh! I have searched for you for so long,” he cried.

The woman was introduced as Giang Huong. It wasn’t long before the couple were betrothed to be married. They held a huge banquet. Fairies came from all over to toast the bride and groom. Everyone was happy to hear their love story. 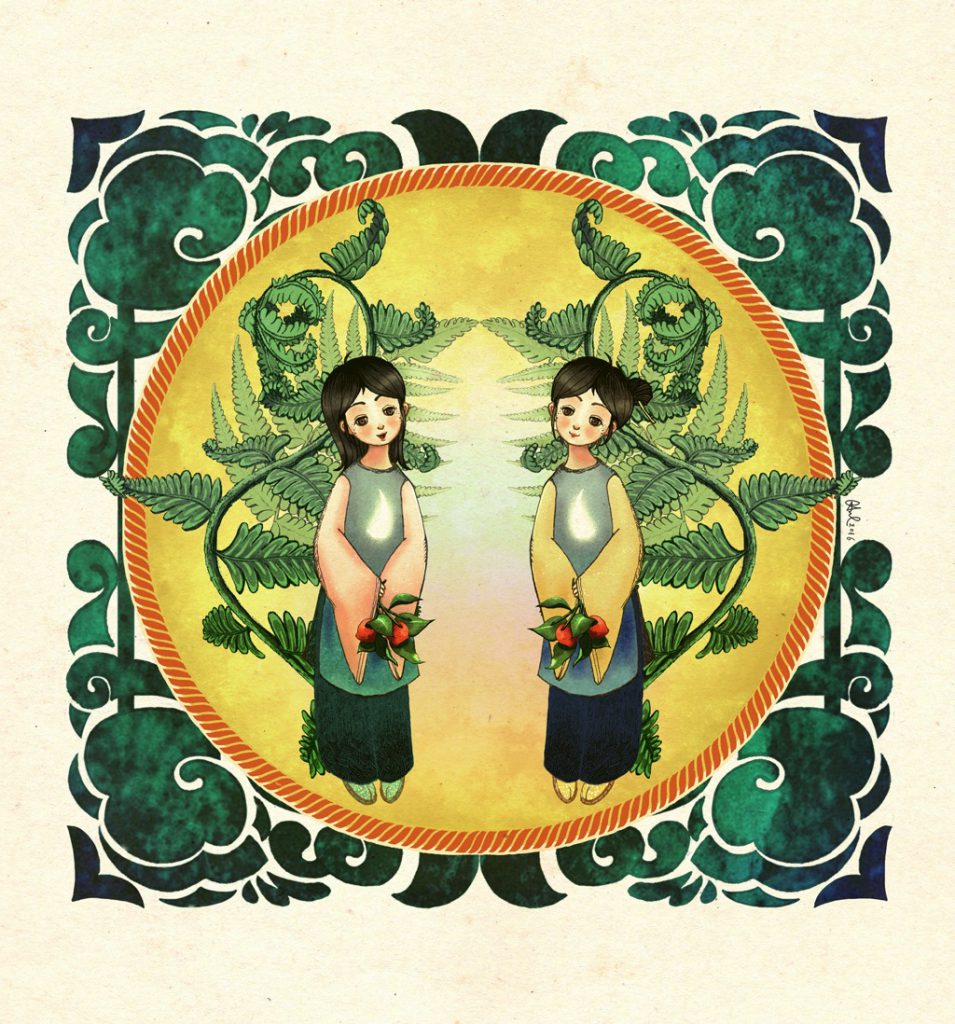 Three years flew by. Tu Thuc had everything he needed. Life was easy in the fairy realm. He remained enthralled with his beautiful wife. But as time advanced, Tu Thuc found himself missing things. One day he confided to Giang Huong: “I have been away from my parents for too long. May I pay them a visit?” Seeing her hesitate, he added: “I will just drop in for a short while, then return and stay with you forever.”

Giang Huong gently convinced her husband not to go. However, Tu Thuc’s homesickness grew. He grew increasingly depressed until Giang Huong felt sorry for him. She organized a cloud cart to carry Tu Thuc back to the human world. 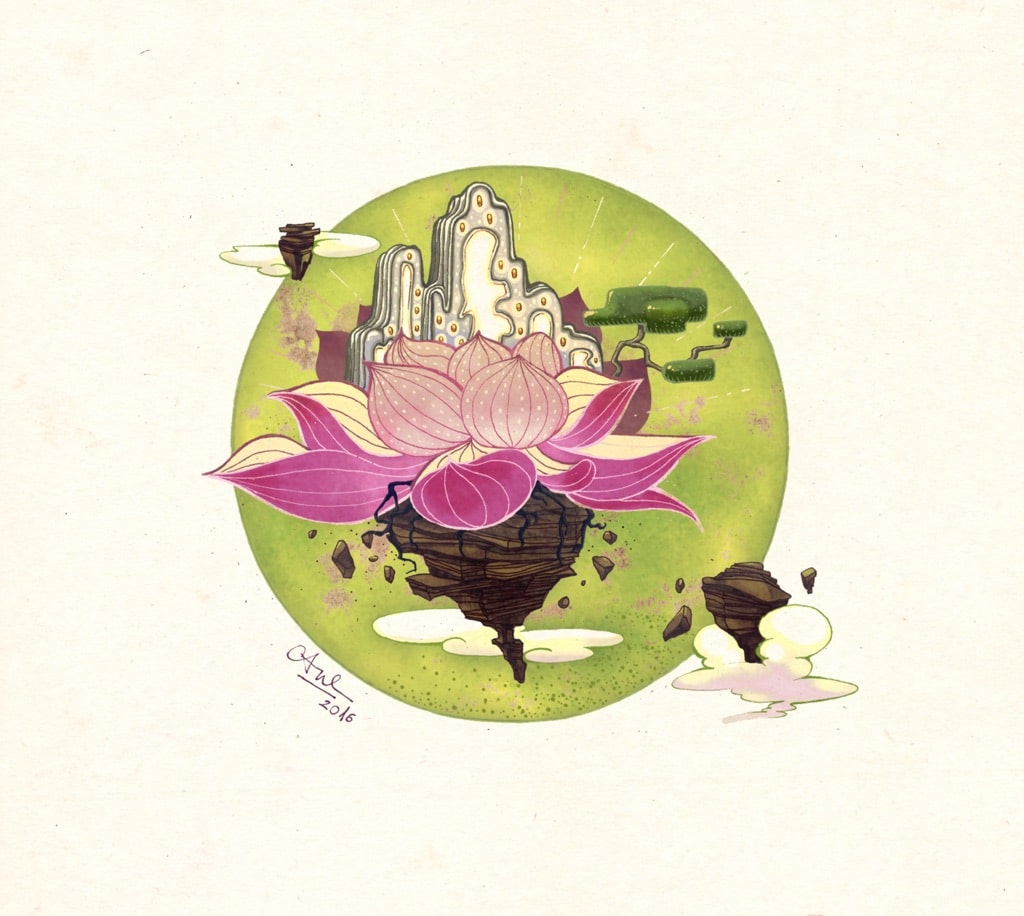 Tu Thuc waved goodbye to his wife and fairy friends. In the blink of an eye, he was back in his own homeland. He recognized the mountains, the river and the stands of bamboo. The cart landed on a wharf where he’d come to bathe as a child. However, looking more closely, he realized things had changed. In just over three years, the houses and fields were different. No one he recognized was in sight. He asked a villager about the whereabouts of his parents and younger sister, but the man had no idea. At last, an elderly man, who was asked if he’d heard about Tu Thuc, said: “As a child, I heard that my great great grand uncle had that name. He was once a local mandarin who gave up his post and returned home. One day he ventured into a cave and vanished. That was three hundred years ago.”

All of a sudden, Tu Thuc understood his wife’s reluctance. He looked at the huge banyan tree growing at the end of his alley. The last time he’d seen it, it was a tiny sapling. 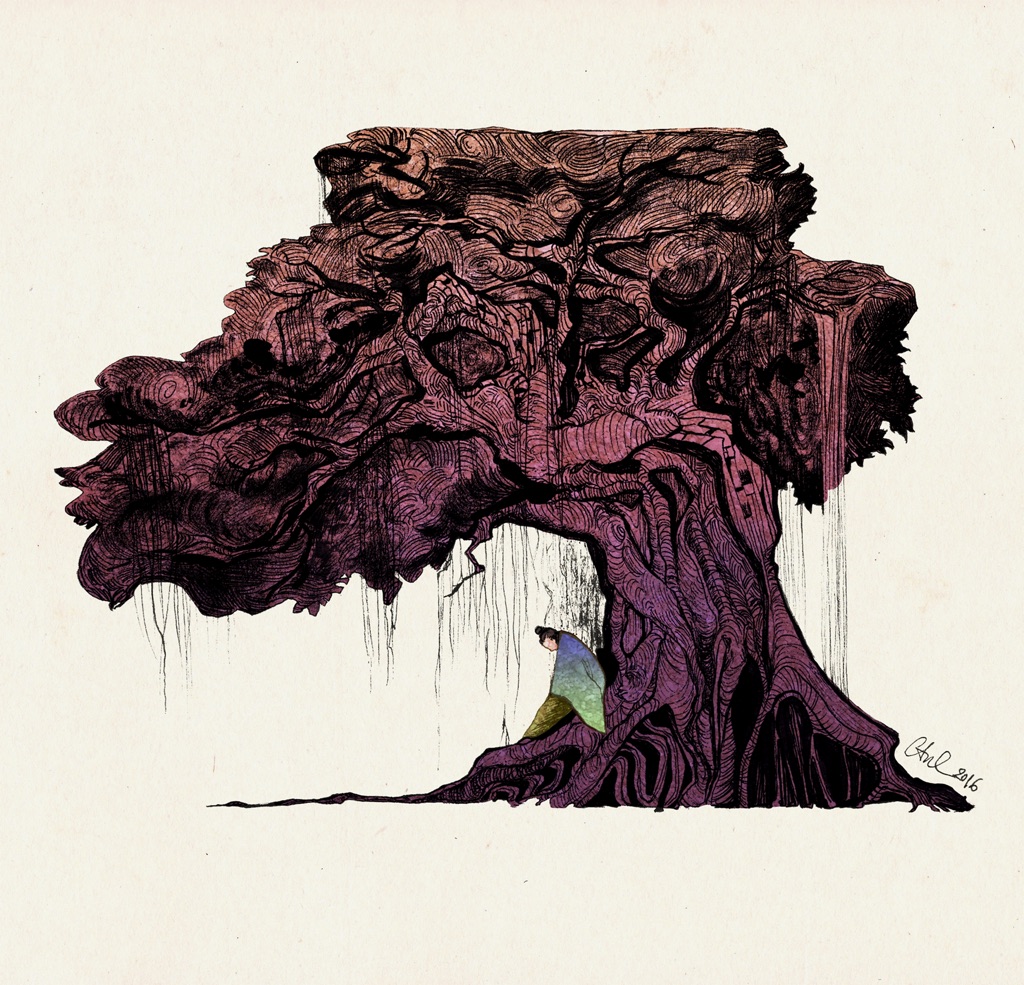 When he returned to find the cloud cart, he was dismayed to find it had vanished. In despair, he climbed to the Holy Patron Gate but found only forests and rocks. He traveled onwards and disappeared. Since then, the cave in the mountain has been known as Tu Thuc Cave.