Ccotland’s capital for over 500 years, Edinburgh is recognised as one of the most exciting cities in northern Europe with a vibrant mix of old and new. Each year Edinburgh attracts up to 13 million visitors, making it the second-most visited destination in the united Kingdom after London. Visitors are surprised by the city’s vibrant and robust commercial centre, new Town, which contrasts with Old Town, the 12th century castle and medieval streets with neo-classical architecture dating back to the 18th century.

Old Town has witnessed the ups and downs of Scottish history, from the invasion of the Northumbrian  Kingdom in the 7th century to Edinburgh’s rise in medieval times and a prolonged English civil war in the 17th century. Old Town is a maze of cobbled alleys, snaky lanes and gardens enclosed within the walls of the ancient castle. The heart of Old Town is the royal mile, which runs from Edinburgh castle on castle rock to holy rood house, where kings and queens have resided since the 15th century. Visitors can catch sight of men in kilts playing bagpipes – a national icon of Scotland. Significant sites include St. Giles cathedral, former Edinburgh university, the parliament house, and the church of Scotland. There are a number of museums, such as the Whisky museum, which stores hundreds of brands of whisky, and the Scotland National Museum. This museum records the nation’s history and displays the equipment used to make kilts. 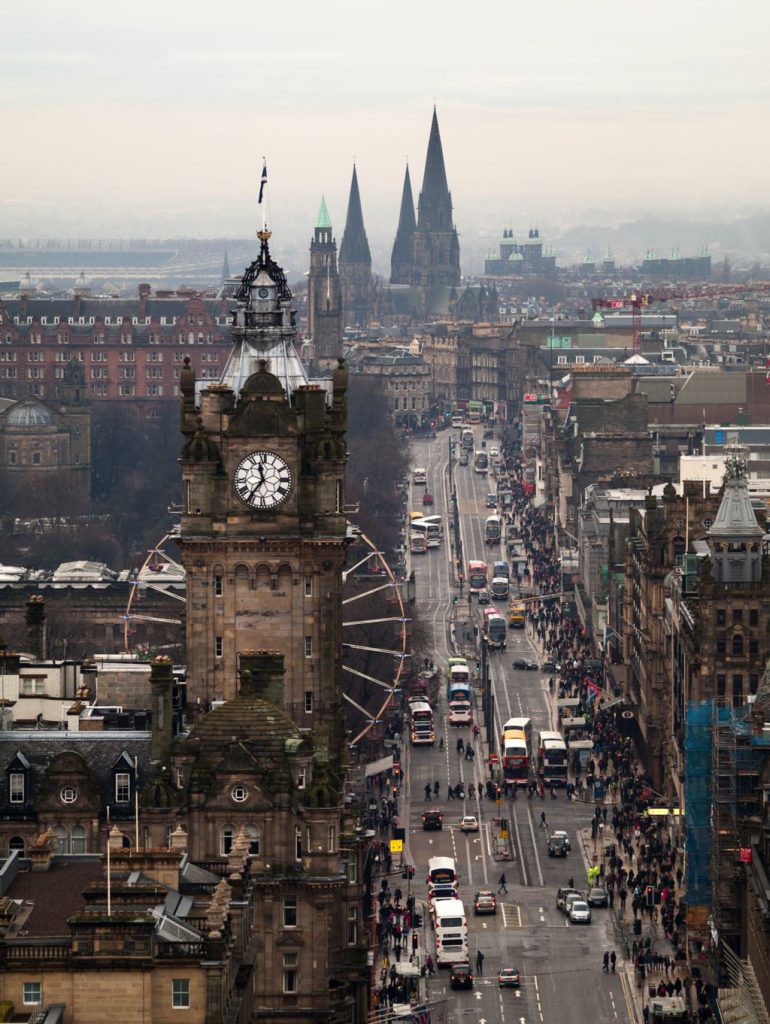 The highlight of Old Town and Edinburgh in general is Edinburgh castle, constructed in the 12th century on castle rock, a vast volcanic crater with steep surrounding cliffs that offer natural protection. Edinburgh castle boasts a complex of bastions, fortresses and palaces that record the locals’ efforts to resist northern invaders. An imposing reception hall holds glass display cabinets containing gem-studded crowns and the crown jewels of Scotland. Visitors may also enter St. Margaret chapel, the oldest construction in the complex that dates back to the 12th century and was built in memory of Queen Margaret, wife of King Malcolm III of Scotland. Edinburgh castle is also famous for its ghost stories. Many prisoners were incarcerated and tortured in a network of dungeons that lie beneath the castle. Visitors can take ghost tours to hear terrifying tales of wandering phantoms, bagpipe music coming from underground, and ghost riders.

As Edinburgh grew, planning officials had to make an important decision: to build New Town in the north of Edinburgh in tandem with Old Town. New Town is a vast urban area with symmetrical streets, houses with high foundations, modern commercial centres, gardens and lush green fields stretching to the north. new Town was designed as a wealthy area to draw Scottish aristocrats living in London to return home. It attracted new types of business and trade to bring much-needed wealth to the city. It also spawned some unique retail models such as horse cart workshops, well-suited to the straight and wide streets. While Old Town embodies Scotland’s long standing cultural values, New Town symbolises new ambitions and new engines for the commercial and cultural development.

Edinburgh’s unique mix of cultural, historic, artistic and aesthetic values are demonstrated in Old Town and New Town, in its art galleries, museums, theatres and the festivals that take place here year-round. Visitors come here to experience a place where old and new coexist to create unexpected magic.