Echoing through the eras

The Tay Son Period (1778 – 1802) is associated with the national hero Quang Trung – Nguyen Hue, who led his followers to drive out foreign invaders and protect the sovereignty of the Vietnamese nation. After repelling Qing invaders in the Year of the Rooster of 1789, Emperor Quang Trung helped to revitalize the nation, stabilize society and bolster cultural development. While his reign was brief, this period bequeathed priceless artistic treasures to the nation. A notable example is the Canh Thinh Bronze Drum, now on display in the Vietnam National Museum of History. 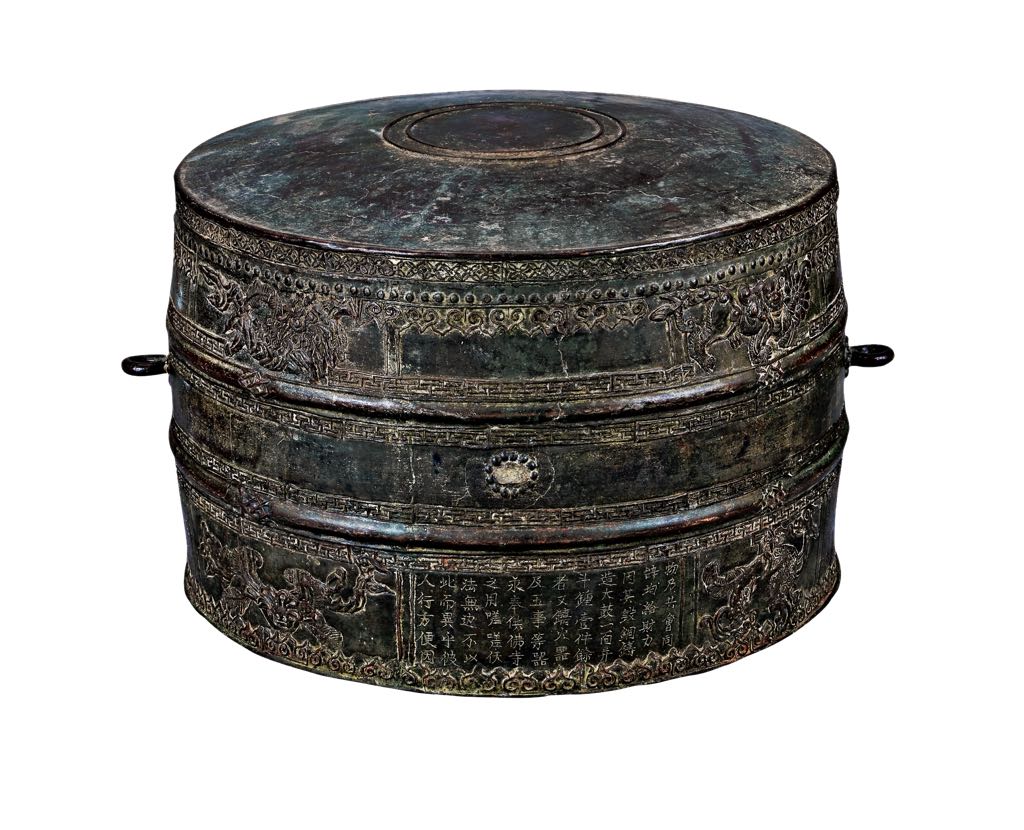 The Canh Thinh Bronze Drum was cast in a wax mould. It weighs 32k and measures 37.4cm high and 49cm in diameter. The face has an arched shape, its center cast with a double circle. The drum is cylindrical, swelling slightly in the middle and divided into three equal parts by two rounded ridges. Each part is carved with a swathe of decorative patterns. The edges feature lemon flowers, studs, repetitive T patterns and well-wishing patterns. The upper swathe features carvings of the Four Sacred Animals (Dragon, Qilin, Tortoise and Phoenix) to symbolize national peace and prosperity, social stability, favorable weather, bumper crops, affluence and longevity. The lower section features the Dragon-Horse carrying a He Map and the Sacred Tortoise carrying a Luo Chart. The He Map and the Luo Chart are two original symbols of the I-ching – the Asian philosophy of changes. 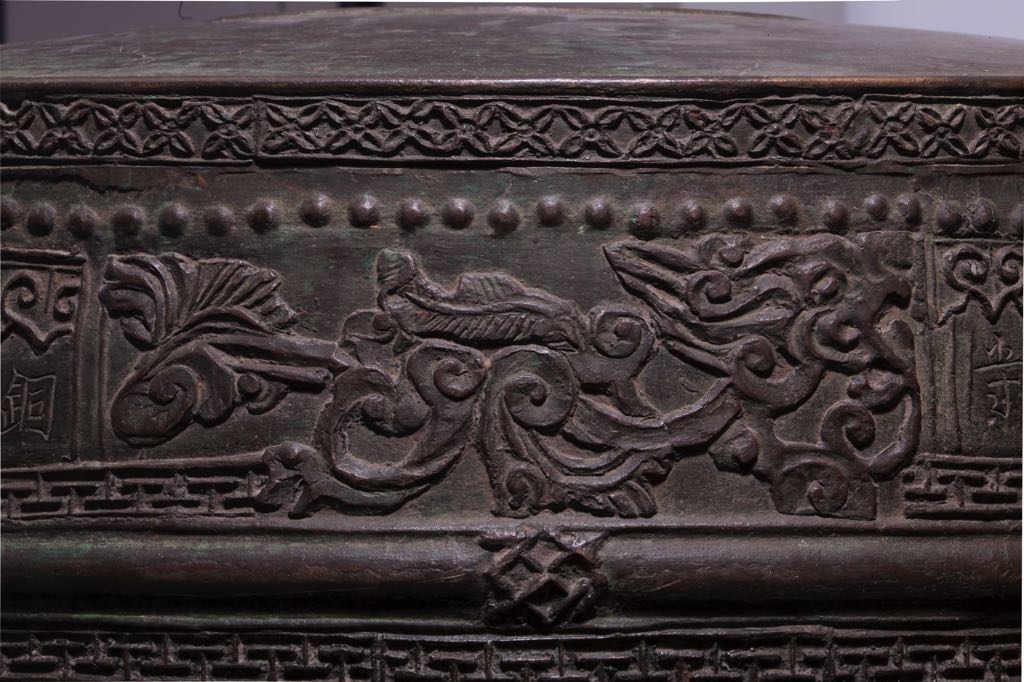 The drum also features Taotie designs. According to legends, the Taotie was a creature so greedy it would consume its own flesh. Initially, this pattern was used in reference to dining etiquette. Later, it became a symbol of physical power, affluence and sustainability. Depictions of Taoties have appeared in ancient Vietnamese arts since the early centuries A.D. 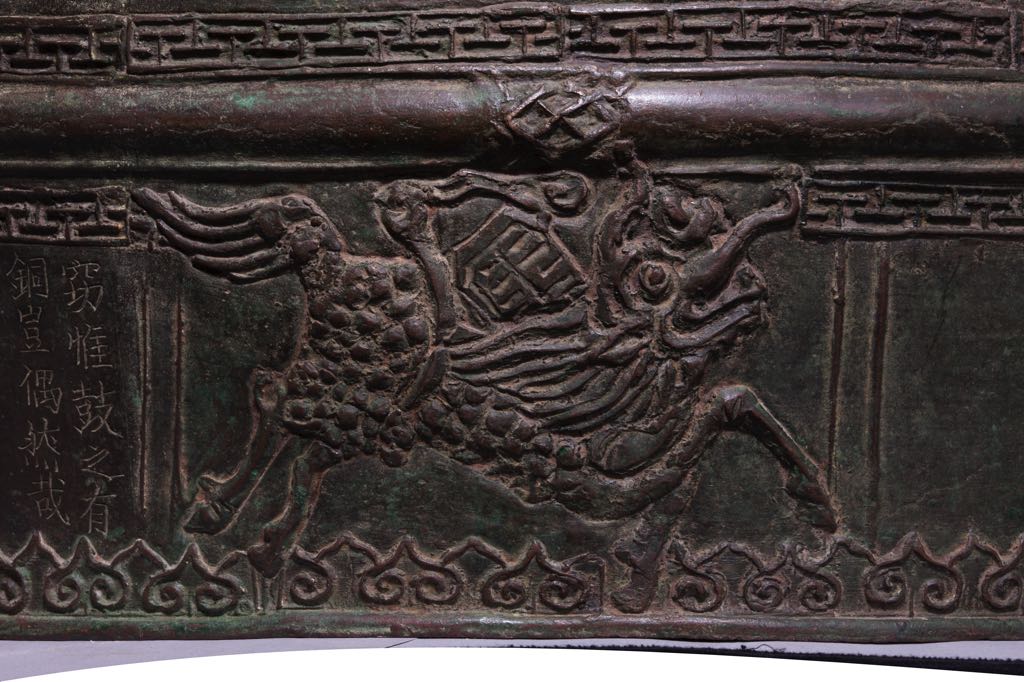 The drum’s form and decorative motifs are typical of its era. The designs are symmetrical and masculine. The Four Sacred Animals, the Dragon Horse and the Sacred Tortoise appeared individually in ancient Vietnamese arts. However, their inclusion as a set of four or two (comprised of the Dragon Horse and Sacred Tortoise carrying the He Map and Luo Chart) heralds the beginning of a new artistic era that endured into the Nguyen Dynasty (1802 – 1945). 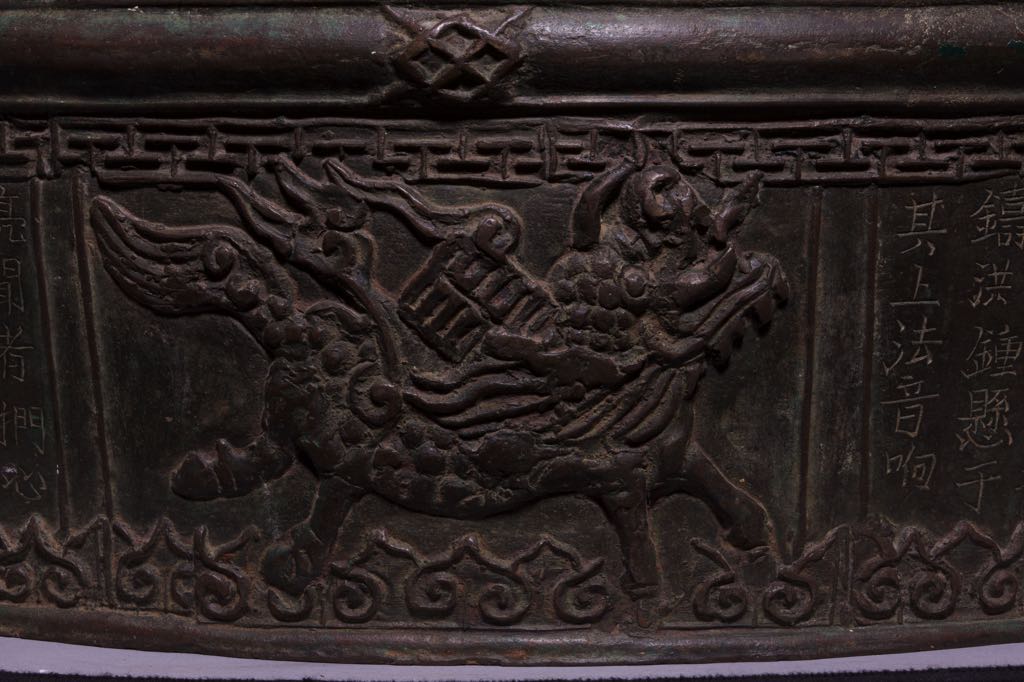 A study of the drum’s designs reveals that, along with new and unique elements, we can trace the evolution of Vietnamese arts. Decorative swathes of studs, lemon flowers, repetitive Ts and Well-wishing patterns were all popular motifs during the preceding Ly – Tran – Preliminary Le dynasties (11th to 15th centuries). Phoenixes with outspread wings and their heads pointing ahead are reminiscent of the Luo birds found on Dong Son Bronze Drums. The double circle on the drum’s face is a revision of the multi-ray sun found on earlier drums. Even the body with its clearly divided ribbed sections is suggestive of the three parts of the bodies of Dong Son Bronze Drums. This form was also found on Muong Drums.

The Canh Thinh Bronze Drum also has documentary value. Inscriptions carved on its body denote that the bronze was cast during a leap month in Lunar April of the eighth year under the reign of Canh Thinh in Tay Son Period (1800) in Ca Pagoda (Linh Ung Pagoda), Phu Ninh Commune, Dong Ngan District, Tu Son Province (presently Nanh Pagoda, Ninh Hiep Commune, Gia Lam District, Hanoi). A script of 222 characters outlines the reasons and purpose of casting this drum and refers to a villager: Ms. Nguyen Thi Loc, the wife of the General Governor and Duke of Giao District in the second year of Vinh Huu under the reign of Emperor Le Y Tong (1736) who donated the funds to build Linh Ung Pagoda. In her memory, villagers of Phu Ninh Commune contributed money and manpower to cast the drum and other religious offerings to dedicate to Buddhist altars and to inform posterity of their ancestors’ good deeds.

The Canh Thinh Bronze Drum is the only known example of a drum from its era, forming a key step in the evolution of bronze drums made in Vietnam over the course of two millennia. The Canh Thinh Bronze Drum shows that arts during the Tay Son Period were distinctive and diverse, with a lasting impact on our nation’s arts. Tay Son artisans not only inherited and promoted the values of fine arts from preceding dynasties but also laid a firm foundation for later artistic expression. Thanks to its unique shape and significant historical, cultural and artistic values, in 2012 the Prime Minister recognized the Canh Thinh Bronze Drum as a National Treasure of Vietnam.