This story was adapted from the “Treasury of Vietnamese Folk Tales”
Illustrator: Nguyen Cam Anh

Once upon a time there was a young man who survived as a farm hand. One day, while chopping wood in the forest, he glimpsed a raven gripping a sparrow. 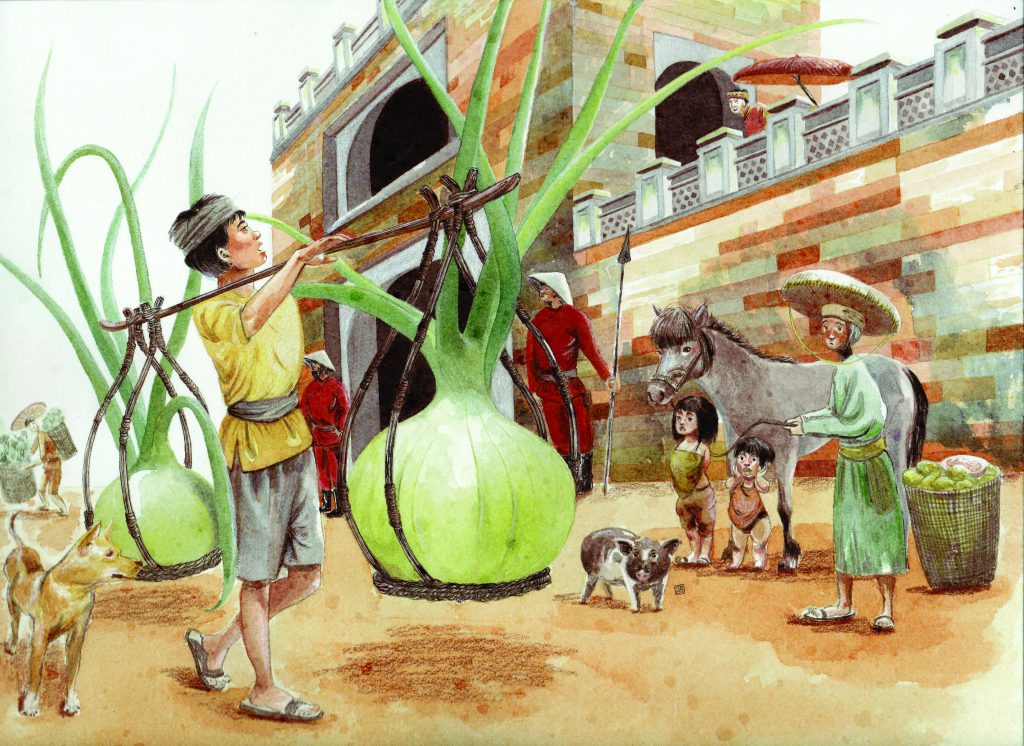 Feeling sorry for the small and helpless sparrow, he picked up a rock and threw it at the raven. The wounded raven flew off in a fury, squawking that it would get revenge upon the farmer.  The farm hand rushed to help the dying sparrow, holding it in his warm hands. In the blink of an eye, the sparrow came back to life. Before flying away, it thanked the young man and told him to expect a gift. 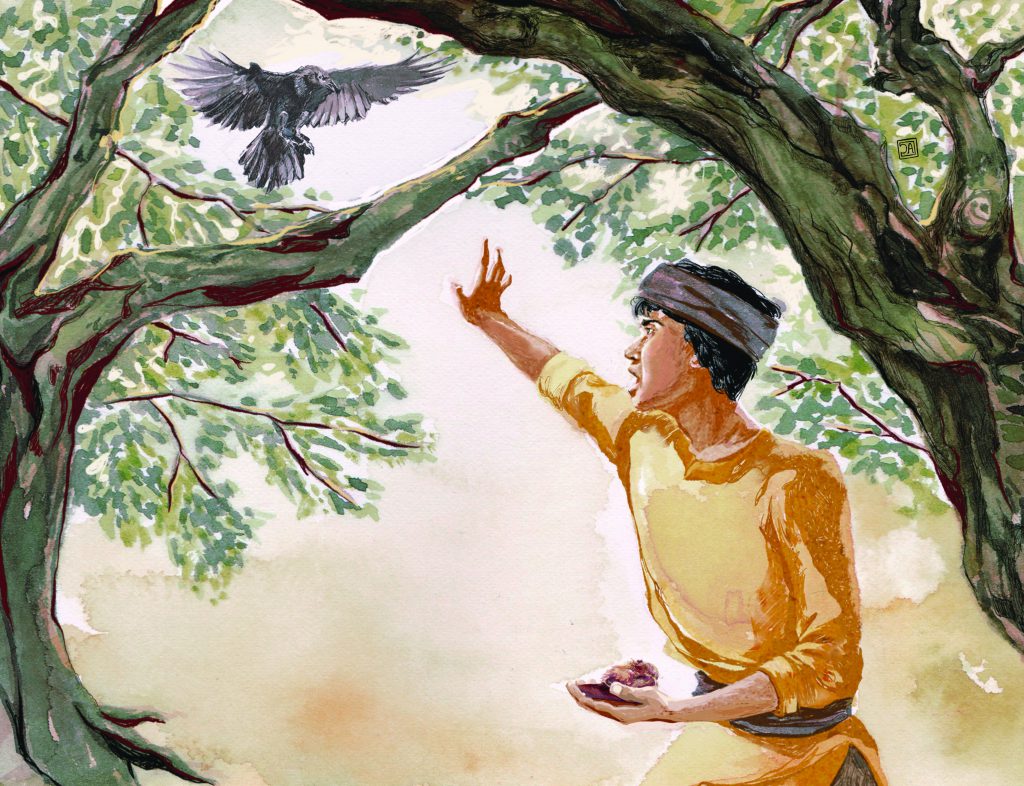 Some time later, the sparrow returned with a tiny pot. It set the pot near the young man and said: “This holds magic water that can rejuvenate mortals and make everything grow. It can be found nowhere else.” The sparrow then flew away.

The curious lad opened the pot. It smelled wonderful. He said to himself: “This water should only be used by aristocratic ladies, not a poor wretch like me.” He carefully closed the lid and upon returning home hid the pot under his roof. Time passed. The young man was so busy eking out a living that he forgot all about the sparrow’s gift.

Several years later, the farm hand finally managed to get married. Like him, his wife was a peasant who had spent her days doing farm work. She was tanned and plain-looking but the couple loved each other dearly. 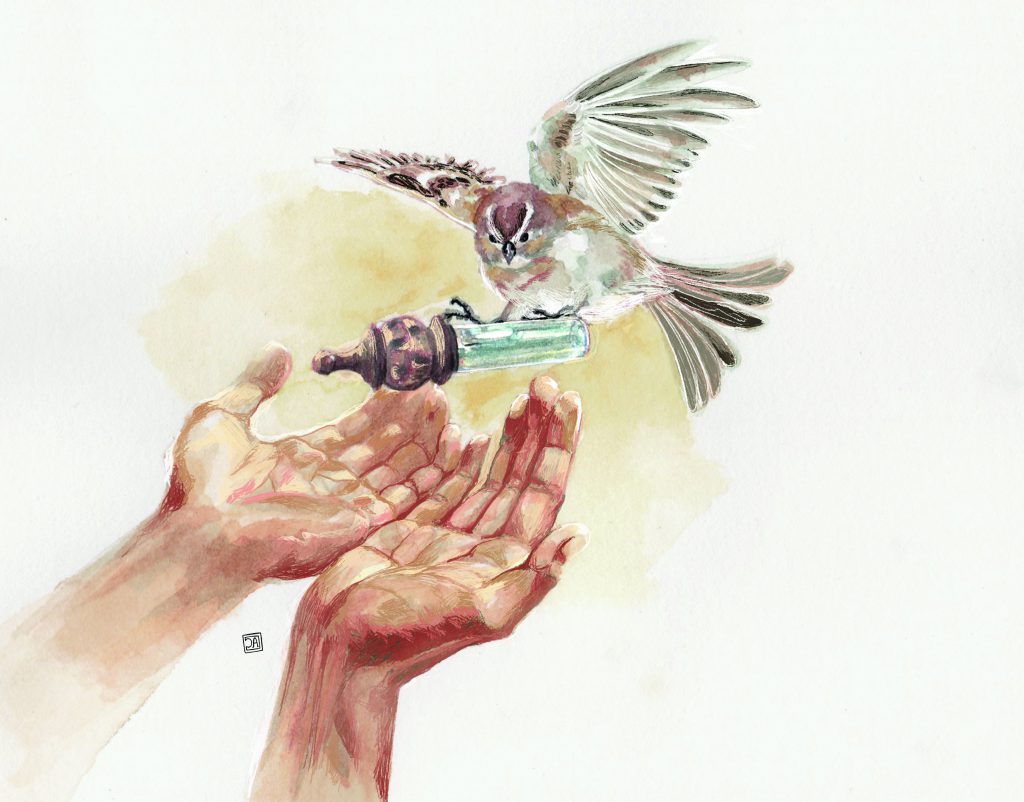 One day when her husband was away plowing, the wife stayed home to clean. Seeing the little pot hidden beneath the roof beam, she climbed on a stool and retrieved it. After sniffing the liquid, she decided it must be some kind of soap. She prepared a bath and spread the liquid all over her body. After the bath, she became extremely beautiful.

When she washed the bath water away it touched several rows of scallions growing near the couple’s well. These scallions began to grow rapidly, their bulbs as large as lime pots and their trunks as long as poles.

When the husband came home, he stood speechless at the sight of his beautiful wife, mistaking her for a fairy who had descended to earth. Only when she spoke did he recognize her. The wife told him what had happened and the husband recalled the grateful sparrow. He gazed upon his wife and told her the story. 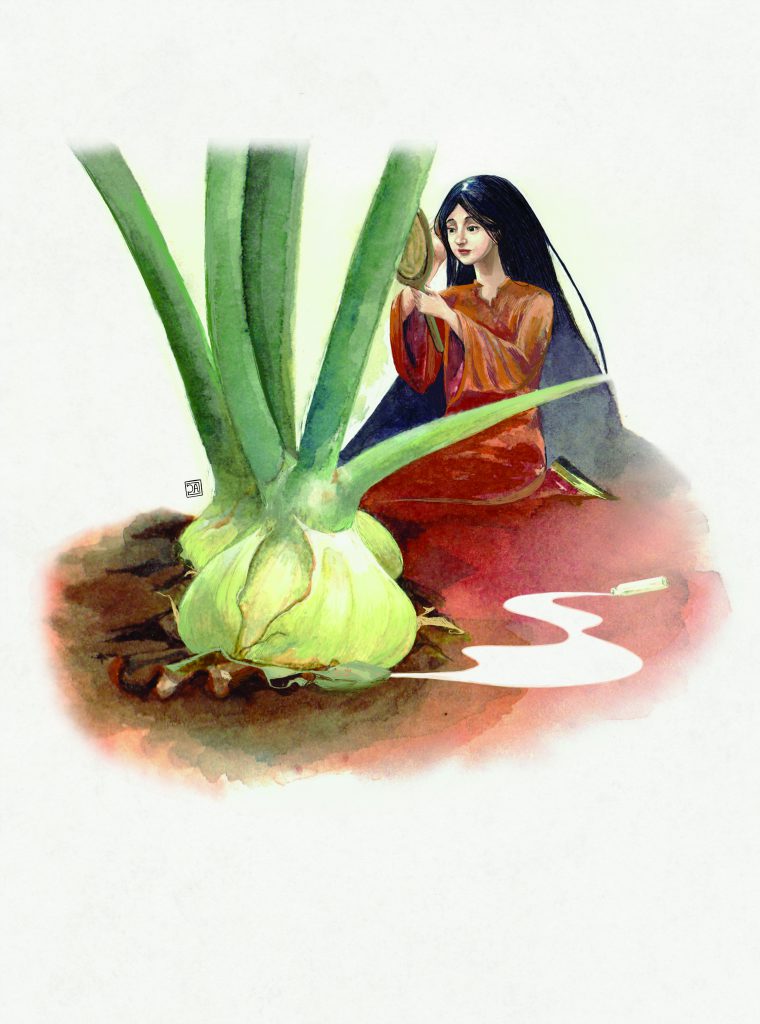 The young man longed to stay near his wife all day long and just look at her. As a result, he ignored his farm work. Aware that they both needed to work to support their family, he hired a painter to paint his wife’s portrait. After that, he gazed at the painting as he worked.

One day, the farm hand hung his wife’s portrait on the edge of a field and began to plow. He had plowed a few furrows when the vengeful raven flew down and stole the portrait. The young man yelled and chased after the bird but to no avail. The raven had already vanished.

The vengeful raven carried the woman’s portrait to the imperial citadel and dropped it into the king’s courtyard. The guards soon brought this strange and beautiful portrait to the king. Gazing upon the portrait the king said: “Although my forbidden palaces are full of beauties, no one can hold a candle to this woman. God must have sent that raven to alert me to her presence!”

The king immediately ordered his men to find the woman in the portrait. They scoured the country. Wherever they went they pretended to held hold a festival to draw people together, then held up the portrait, saying they wished to return it to its rightful owner.

When they reached the district where the young farmer and his wife lived, they held a three-day festival. Hearing the soldiers’ lies, the young man came forward to reclaim his wife’s portrait. The soldiers caught him and forced him to take them to his house. There, they captured his wife and took her away in a palanquin.

At the palace, the wife refused to smile or talk. She allowed no one to approach her. She refused to brush her hair or to wear the fine gowns left out for her. Although the king rejoiced at having found her, he was distraught by her rejection. He declared that anyone who could make her laugh or speak would win a handsome reward and title. Many famous clowns, comedians, physicians and sorcerers flocked to the citadel in hope of making the beautiful woman laugh. Despite their many tricks, none succeeded.

After his wife was taken away, the young man fell into despair. Hearing of the king’s reward, the husband knew that his wife had been taken to the palace. He was determined to retrieve her. Before leaving, he uprooted some scallions, tied them into a big bunch and carried them by his side. Outside the citadel he cried:

Their trunks as long as bamboo poles,

Their bulbs as large as lime pots,

Who will buy these scallions?

Please grant mercy on me!

His calls were heard in the palace. His wife suddenly beamed. She told the royal maids: “Come, call the scallion vendor!” At the sight of her husband, she smiled. Seeing her smile for the first time, the king was overjoyed. He was also amazed by the vendor’s exceptionally huge scallions. Convinced the sight of those giant scallions had made her smile, the king decided to pretend to be the scallion vendor so she’d smile at him. He told the young man: “Wear this. Give me your shirt and that bunch of scallions!” 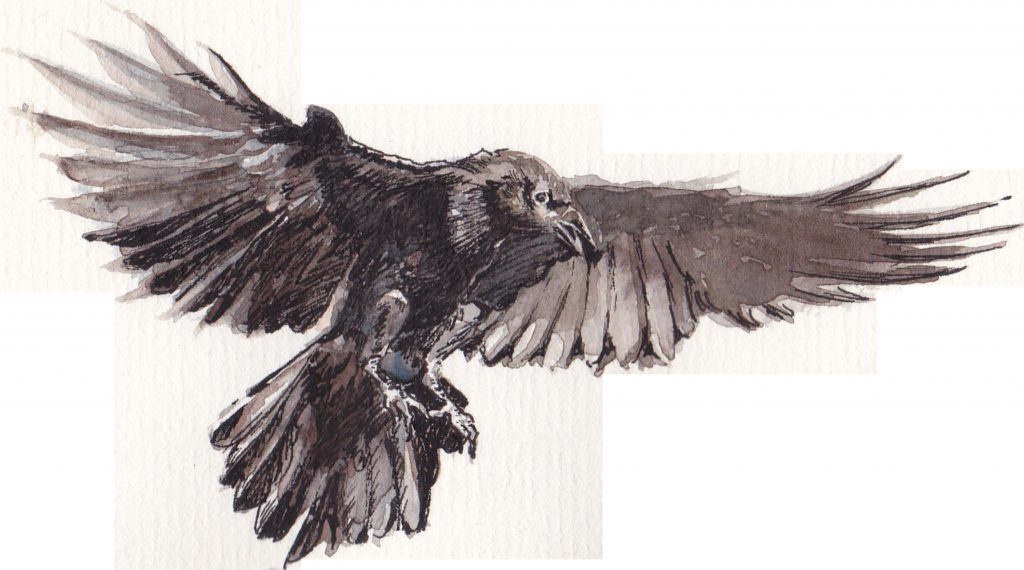 When the wife laughed even harder, the king came closer and exaggerated his acting. But all of a sudden, the woman ordered the royal maids to release the hounds. Having mistaken the king for a poor vendor, the hounds rushed to attack him.

“Quick, climb onto the throne!” whispered the beauty to her husband.

The young farmer climbed clumsily onto the throne while the mandarins and court maids bowed in respect.  The new king and his wife lived a long and happy life together.