This traditional tale was adapted from “The Treasury of Vietnamese Fairy Tales”
Illustrator: Nguyen Truong Linh

Once upon a time, a wealthy man had a daughter. She was beautiful, yet snobbish. She drove all her friends away. Even young menwere frustrated. At the age of consent, the girl could not find a husband. She dismissed every suitor: “What a tub!” she cried, or: “Long and lean is ill to be seen!”; or “Fat and short, not fit to court!” 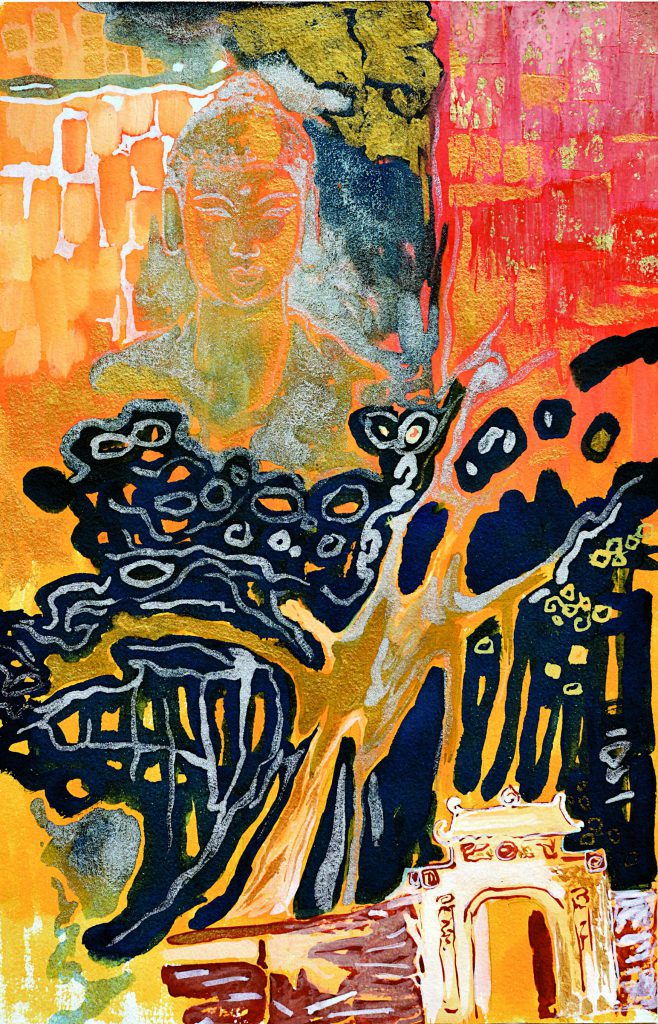 At last, she got married. Her husband loved her, yet was upset by her jealousy. Neighbors frowned upon their quarrels. Finally, the unhappy couple parted ways. The young lady entered a nunnery.

For twenty years she practiced Buddhism at an ancient pagoda. Birds and wild beasts grew accustomed to her. But after twenty years, she had not found Enlightenment. This dismayed her, as she considered
herself very knowledgeable about Buddhist doctrines. She decided to travel West to seek an answer. In spite of many challenges, she was determined.

After climbing a mountain, the nun found a rustic house in which to rest. The hosts, a mother and her child, were rural people. However, they were pious Buddhists and vegans who treated her generously. Hearing of her stoicism, they proclaimed her as their master. They asked to follow her to Nirvana. “You two want to be a Buddha? Alright, follow me!” sniggered the nun. To herself she said: “How could such simple people find Nirvana when a veteran like me has not succeeded?”

With her two companions, the road was less daunting. Finally the trio reached Buddha’s realm. Throughout the long journey the mother and child held the nun in high regard. She began to have doubts about them. What if they attained Nirvana before her? She would have to bow down to them! 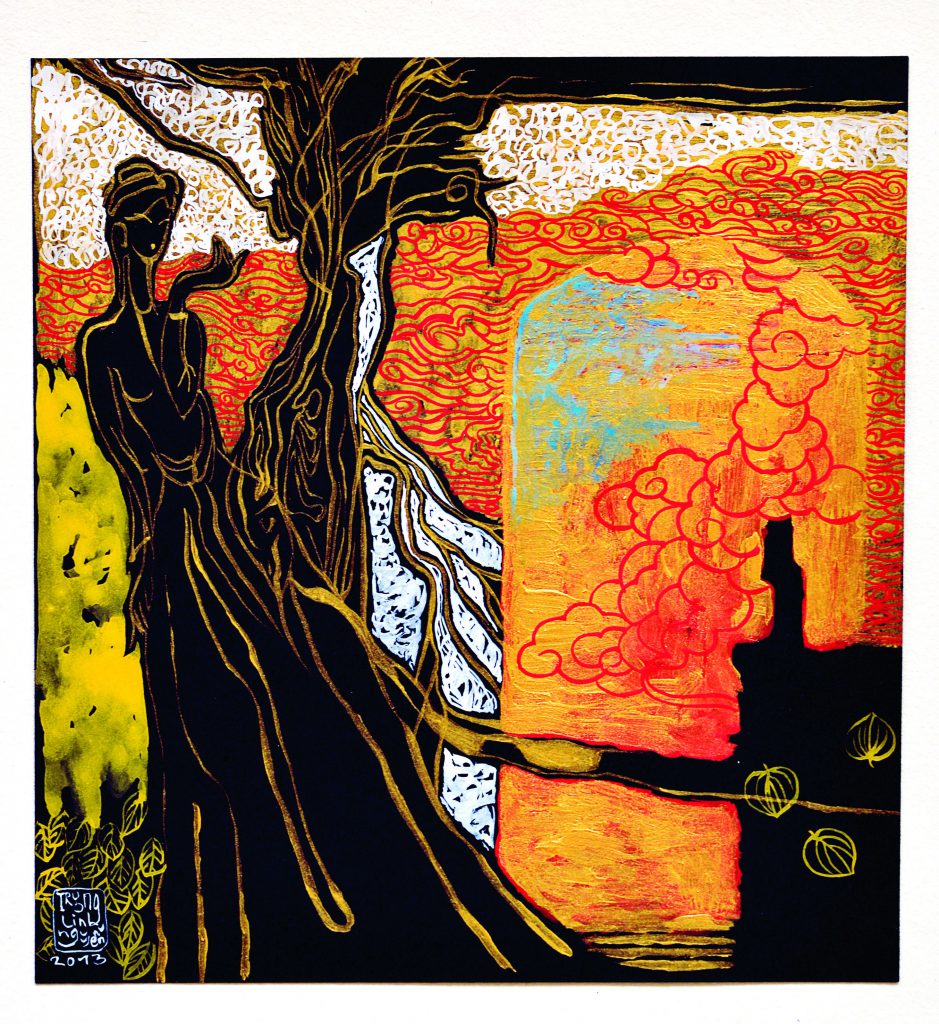 Having heard of the trio’s difficult journey, the Buddha watched from afar. He watched the nun’s words and behavior. When they were about to cross a wide river, the Buddha created an ancient pagoda screened by a huge Bodhi tree.

To get rid of the mother and child, the nun feigned surprise and pointed at the pagoda. “Look! We have approached the West. That’s fast! Over there is the Bodhi tree under which Gautama Buddha achieved enlightenment!” she lied. “Now choose a high branch, murmur some scriptures and release yourselves. Both of you can become Buddha!” 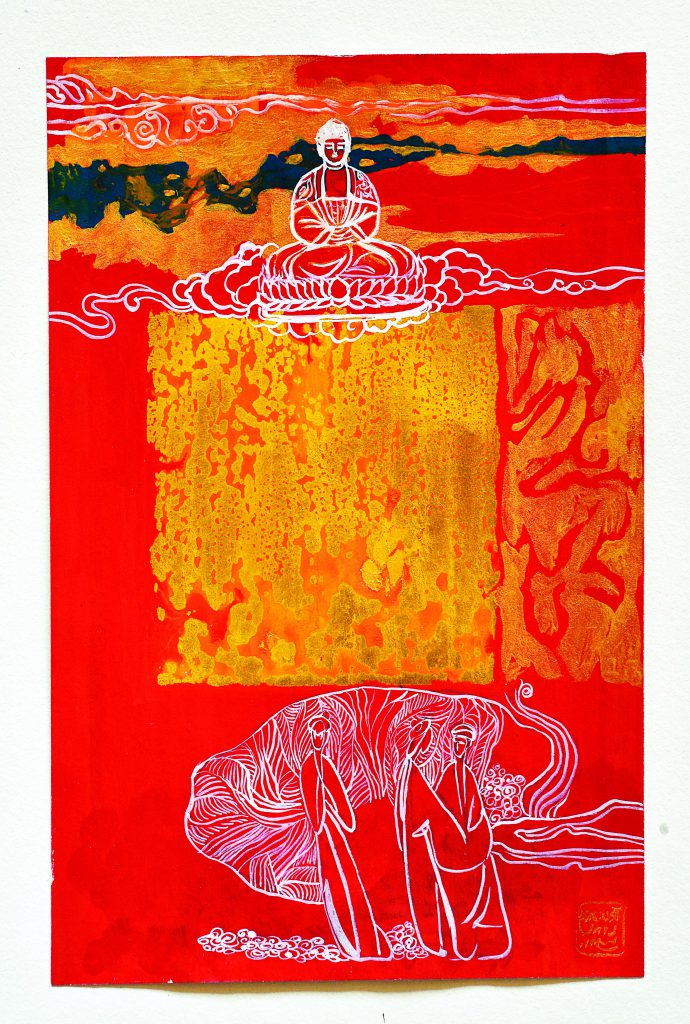 Trusting the nun’s advice, the mother and child climbed the tree. Gautama Buddha approached and carried them up to heaven. Four arhats stood on giant lotuses to welcome the pair. They waved their hands to call the nun, far below them.

“They became Buddhas!” cried the nun, aghast. She climbed the tree in an attempt to follow them. However, Gautama Buddha wished to punish her arrogance. She slipped, fell and died, then was reincarnated as a lime pot. The Buddha wanted to show people that those who mask cruelty with superficial benevolence are hollow inside.