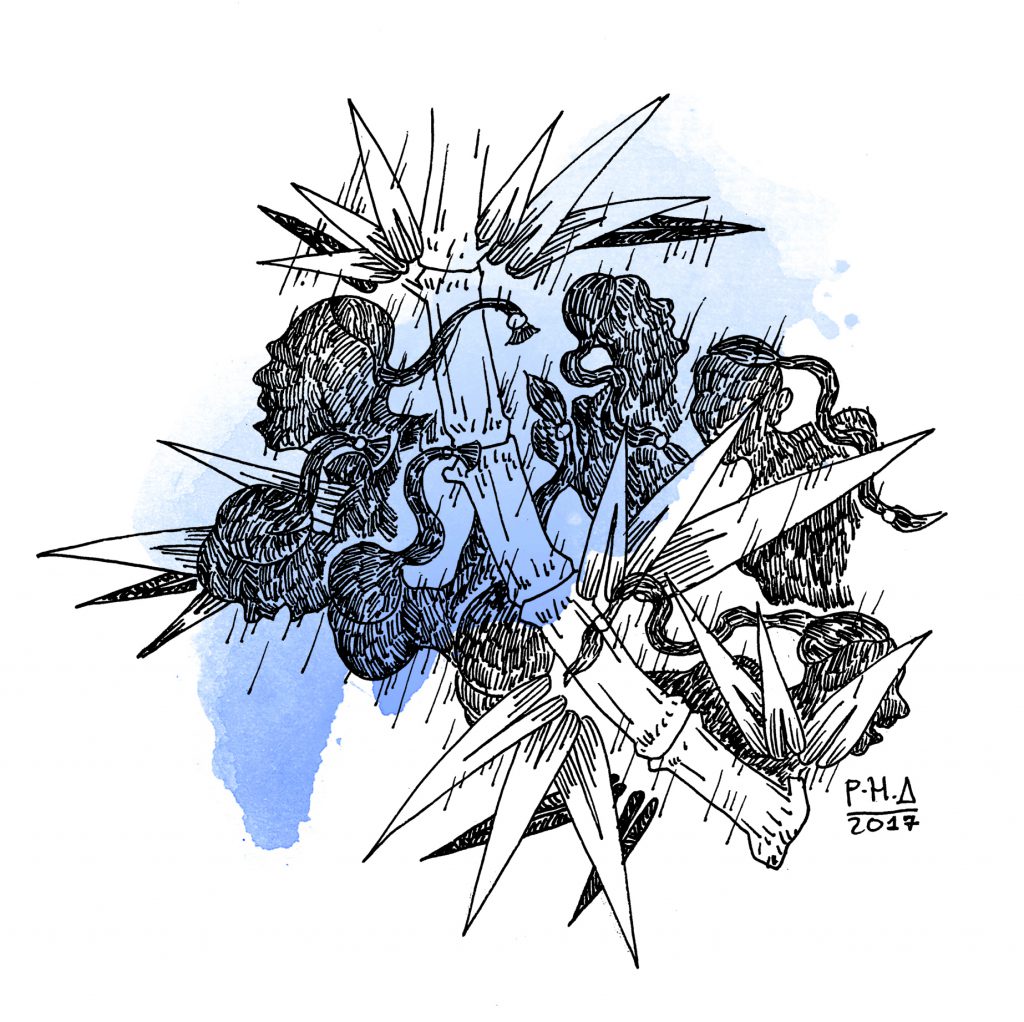 During the reign of the Hung Kings, a middle-aged woman lived alone. One day, she saw large footprints all over her eggplant field. Dismayed, she cried: “Who made those giant footprints?”

Stepping into a footprint, a shudder ran through her. Then she was stunned to learn she was pregnant.

In due time, the woman gave birth to a baby whom she named Giong. This boy did not learn to walk or talk. At the age of three he couldn’t even turn over or sit up. 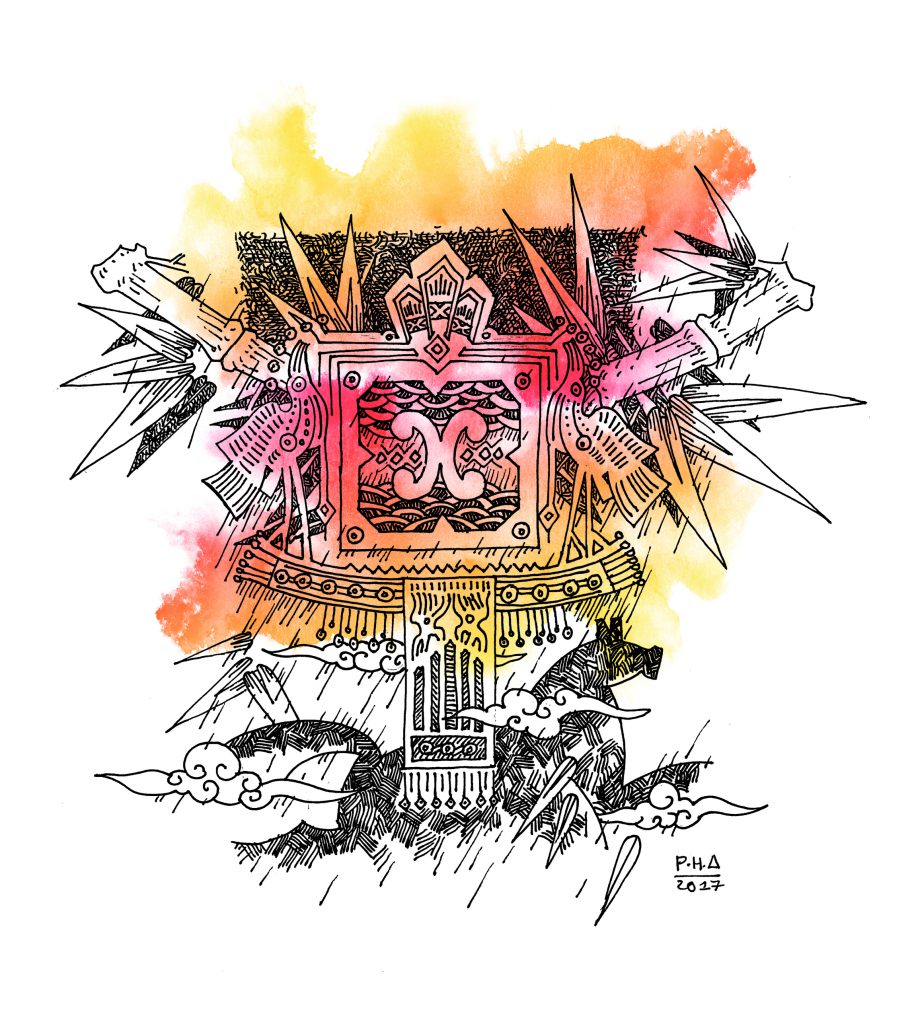 At that time, Yin troops invaded the nation. The troops were brutal and ruthless, burning villages, looting granaries and killing villagers. The army of King Hung was repeatedly repelled. The king sent his emissaries across the land to search for a gifted general.

One day the king’s emissary arrived in the village of baby Giong. Hearing the emissary call out for brave men of talent, Giong’s mother joked: “My baby, you are so slow to speak and walk, when will you be ready to defeat our enemies for our king?”

Suddenly, Giong stared at his mother and uttered these words: “Mother, please summon the king’s emissary!”

The boy’s mother was surprised and frightened. She rushed to tell her neighbors. The villagers were amazed by this strange event and went to tell the king’s emissary.

Seeing the small boy, the king’s emissary said: “You are a three-year-old learning to speak, why did you wish to see me?” 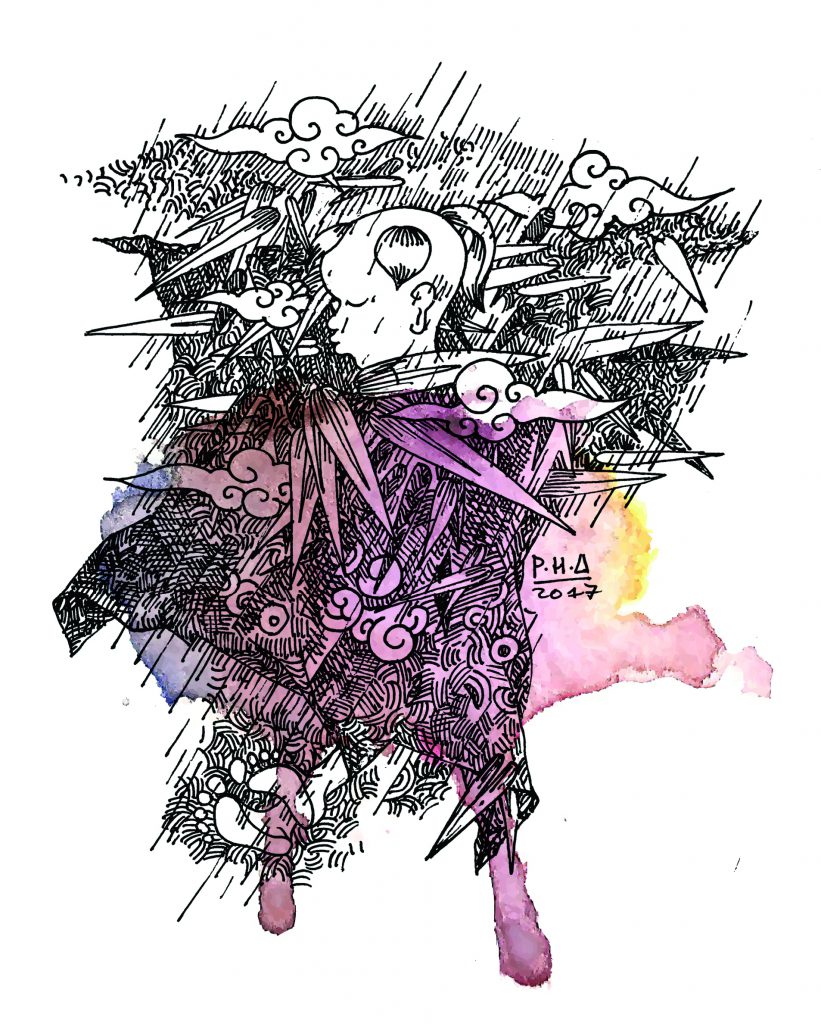 Giong replied in a firm voice: “Ask the king to make me an iron horse, an iron blade, a suit of armor and an iron helmet. I will sweep the invaders away”.

All those who witnessed this event assumed a deity had appeared. The king’s emissary rode back to report this strange happening to the king, who ordered his blacksmith to fashion an iron horse, an iron blade, an iron helmet and a suit of armor. The finished products were incredibly heavy. Dozens of strong men could not lift them. King Hung sent thousands of soldiers to carry these items to baby Giong.

Seeing the approaching troops, Giong’s mother was frightened. “The army is marching to our village. This is not a joke. What do we do now?” she cried.

Giong sat up and said: “It’s my duty to fight our enemies but you must feed me as much as you can”.

The boy’s mother cooked pot after pot of rice but Giong kept asking for more. The more he ate, the more he grew, changing from a toddler to a tall, muscular young man. When she ran out of rice, Giong’s mother asked her neighbors for help. They brought rice, sweet potatoes, buffalos, liquor, fruits and cakes. Soon, the yard was stacked high with offerings. Giong kept eating and pleading for more food.

“Mom, give me some clothes” said the boy. Villagers brought silk and sewed clothes for the boy, but he continued to grow. Soon, his new clothes were too tight and short. More silk was needed to lengthen the flaps of his tunic. It wasn’t long until Giong’s head touched the ceiling of his small house.

When Giong stepped outdoors, he grew even bigger. With a thunderous roar this towering giant cried: “I am the General from Heaven!”

Giong put on the suit of armor and the iron helmet. He twirled the heavy iron blade. He bid farewell to his mother and the villagers and mounted the iron horse, which sprang to life, snorting red fire. 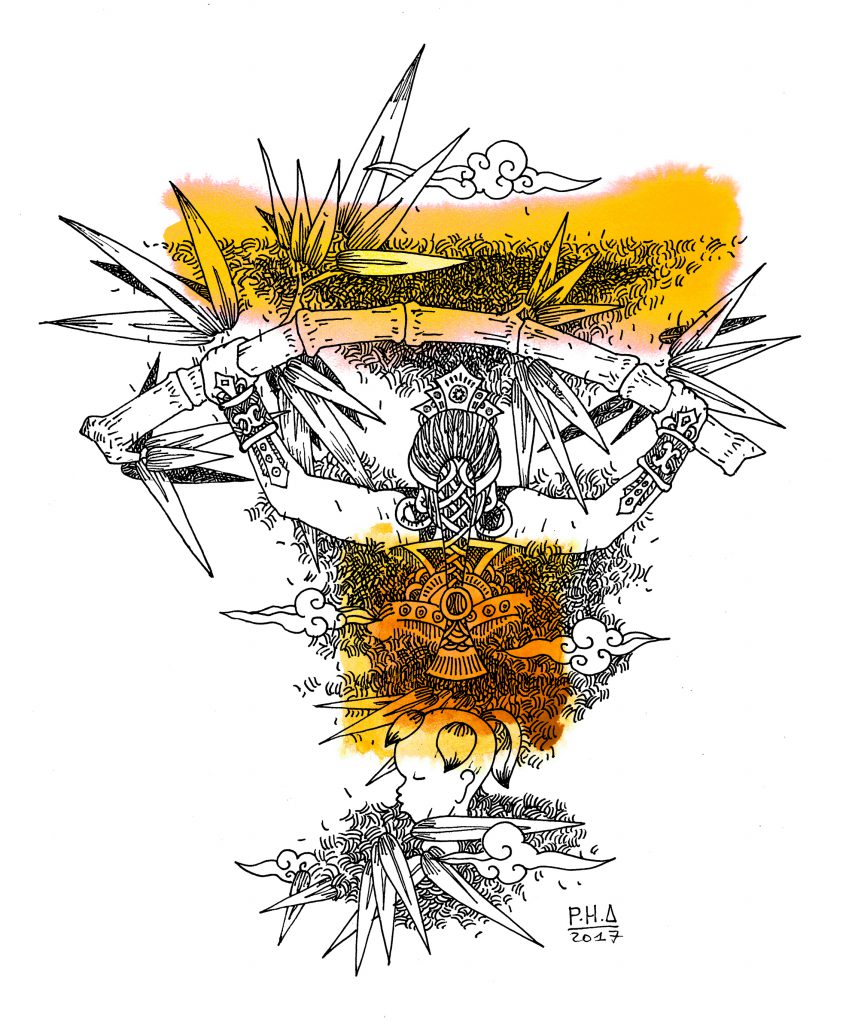 Giong urged the horse forward and it galloped away, its hooves shaking the earth. In the blink of an eye, the horse raced to the enemies’ camp. Giong’s iron blade swept through the troops like lightning. His horse snorted fire, which scorched the enemy’s camp and the nearby forests. Smoke and screams filled the air.

The Yin general refused to retreat, ordering his men to move forward. Undeterred, Giong kept fighting. Suddenly, his blade broke. Without hesitation Giong plucked up a stand of bamboo and used the long sticks to mow down the enemy. The Yin general was beaten to death. The surviving invaders surrendered and begged for their lives. In less than a day Giong had defeated the invading army.

As his horse approached the foot of Soc Son Mountain, Giong pulled off his iron helmet and armor. The young man and his horse rose into the sky and soared off towards heaven.

To honor this savior, King Hung ordered the construction of Giong Temple in the boy’s home village and proclaimed him the Heavenly General of Phu Dong.

To this day, rows of round ponds may be seen from Kim Anh and Da Phuc to Soc Son. These are said to be the hoof prints left by Saint Giong’s massive horse. The forest that was scorched during the battle is called The Burnt Village. The bamboo trees used by Giong to flog the enemy were also scorched, turning from green to yellow with little black dots. This species still exists and is called “golden bamboo”.