Danang is blessed with tranquil beaches, mountain ranges and the romantic Han river, which flows through the city. Many bridges cross this river, adding to the dynamic charm of this young city, which has been dubbed “the most liveable city in Vietnam”. We introduce some of Danang’s striking bridges

Han River Bridge – The most famous bridge in Danang

Inaugurated on the 25th Anniversary of the Liberation of Danang on March 29, 2000, this bridge represents a turning point in the city’s new development. This was the first bridge connecting downtown with the impoverished eastern portion of the city. The bridge is a source of pride for Danang locals since its construction was financed by both the public and local authorities and it was designed and built by Vietnamese architects and workers. Until now, the Han River Bridge remains the only spinning cabled bridge in Vietnam. Visitors often come to see this unique bridge, especially at night when it is brightly lit and serves as a local landmark. At around 1am, the bridge’s central cable spins by 90 degrees around its axis and lies lengthwise to the river to open the bridge to allow large vessels to pass through. At around 4am, the bridge spins back to its fixed location. Since large vessels recently stopped traveling beneath the bridge, it is now opened and closed for maintenance and to entertain tourists.

Since its inauguration in 2013, the Dragon Bridge has been a bright spot in Danang’s architectural landscape and an icon of the city. As the name suggests, the Dragon Bridge was modelled after a dragon with its head facing the sea. On weekends, special events and during the Lunar New Year holidays, fire and water burst dramatically from the dragon’s mouth. The Dragon Bridge is located on the main road connecting Danang International Airport to luxury tourist resorts on the son tra – Dien Ngoc coastline. This bridge represents the new face of the city and is a lively symbol of Danang’s strong and sustainable development.

With a long history dating back to French colonial times, Tran Thi Ly Bridge was initially a railway bridge that was later named Trinh Minh The Bridge. After 1975, the bridge was renamed in honour of the heroine Tran Thi Ly. In 2009, Danang authorities decided to rebuild the bridge. By 2013, Tran Thi Ly Bridge had an impressive new shape, spanning the Han river in the form of a vermillion sail. Located on the route that links the international airport to the city centre, Tran Thi Ly bridge makes a strong first impression on incoming tourists. As striking as its sister bridges when darkness falls, the brightly lit bridge shines as the only suspension bridge in Vietnam. From all corners of the city, Tran Thi Ly Bridge evokes a red-sailed boat heading towards new discoveries and successes. 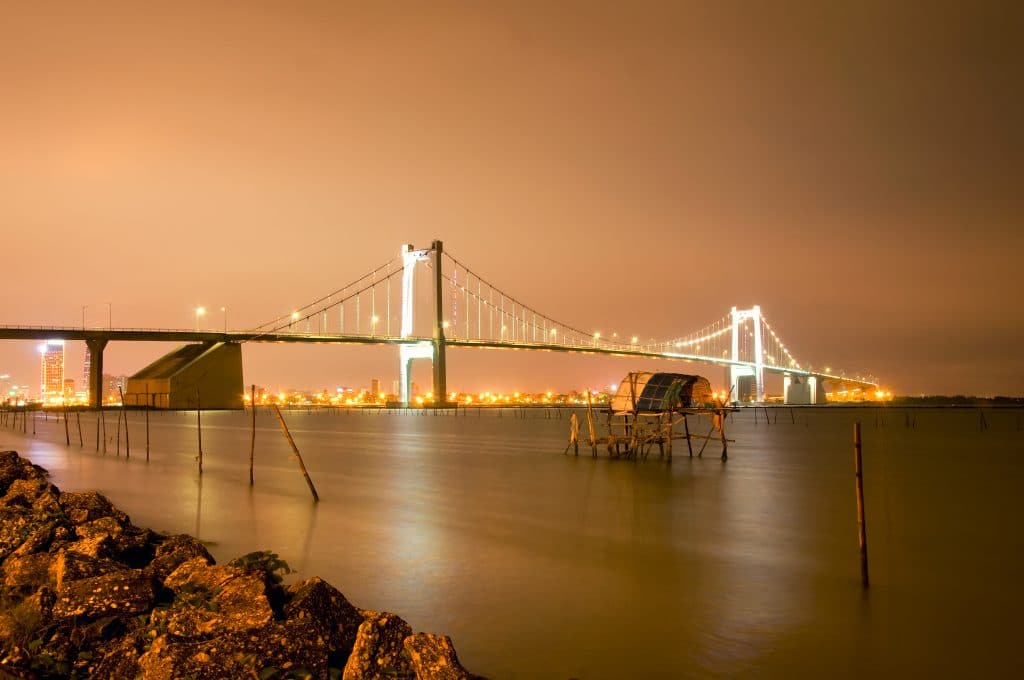 Connecting the two banks of the Han river, Thuan Phuoc Bridge is often called the “Soft Concrete Sash”. Inaugurated in 2009, it is considered one of the finest bridges in Vietnam thanks to its impressive architecture and location. Thuan Phuoc Bridge is located at the estuary through which the Han river flows into the sea, making it a favourable route for tourists and important for the economic development of Danang. From all angles, Thuan Phuoc Bridge stands out due to its extravagant and graceful shape. When darkness falls, LED lights highlight this enchanting bridge and reflect magical colours in the river.